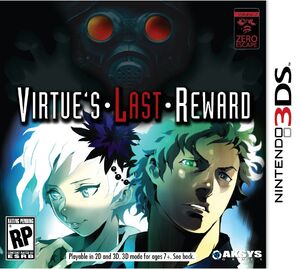 Zero Escape: Virtue's Last Reward (known as Gyokugen Dasshutsu ADV: Zennin Shiboudes in Japan, which translates to Extreme Escape Adventure: Good People Die) is a visual novel adventure game for the Nintendo 3DS and PlayStation Vita, developed by Chunsoft, and made by the creators of 999: Nine Hours, Nine Persons, Nine Doors for the Nintendo DS, specifically the script writer and character design.

The game features full voiceover work. [1] Originally, the title was not going to be localized in North America, however, Aksys Games was later revealed to be handling its publication. [2] The game was released in Japan on February 16, 2012 and North America on October 23, 2012. [3] [4] In Europe, it was published by Rising Star Games and released November 16, 2012. [5]

The game stars the dashing (and somewhat perverted) hero Sigma, who wakes up in an elevator after being kidnapped. Sigma must then escape from 16 different rooms, each with unique puzzles, with 8 other people in order to escape alive. There is a flowchart implemented into the game, which allows you to hop back and forth between different timelines, necessary when you stumble upon a story lock. There are two difficulty levels, hard and easy, as well as 24 endings, which change depending on decisions players make and who lives and who doesn't. [6]

A dedicated wiki for this game is in development here.

Another wiki which focuses on the Zero Escape series is here.

Zero Escape: Virtue's Last Reward was well received, with critics impressed with the plot of the game, the characters, and the improvements over its sister title, Nine Persons, Nine Persons, Nine Doors. GameRankings and Metacritic had aggregate scores of 86.75% and 88%, respectively. Famitsu gave it a 34/40, while Nintendo Power and Gamespot gave it a 8.5, with both publications praising the plot twists and multiple endings. It also won handheld game of the year from Gamespot, best story from IGN and RPGFan, and best graphic adventure from RPGFan. 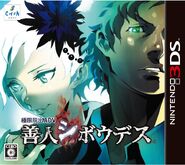 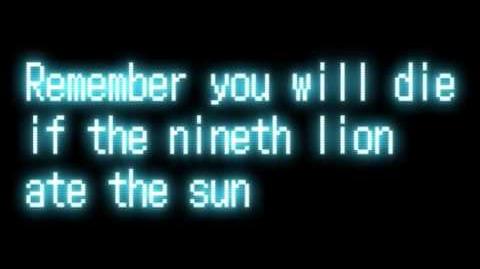 Retrieved from "https://nintendo3ds.fandom.com/wiki/Zero_Escape:_Virtue%27s_Last_Reward?oldid=17624"
Community content is available under CC-BY-SA unless otherwise noted.