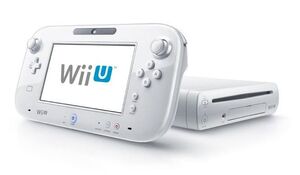 The Wii U (codenamed Project Cafe) is a home console from Nintendo, and the successor to the Wii. It is the first console of the eighth generation, and shares the said generation with the Nintendo 3DS, PlayStation Vita, PlayStation 4, and Xbox One. It was released on November 18, 2012 in North America, and it comes in either a Basic or Deluxe bundle. It is Nintendo's 6th home video game console, the first to feature HD visuals, and comes with a new controller with a touch screen on it.

After the launch of the Wii, it was rumored that Nintendo would publish an HD version of the Wii, as its competitors, the PlayStation 3 and Xbox 360, had HD outputs, but the Wii did not. Nintendo deconfirmed these rumors. In April of 2011, the rumors popped up again, with numerous sites confirming that the system was more powerful than the PS3 and 360, and that it had a tablet-like controller with a screen on it. Nintendo sent out a press release confirming this. The console was officially unveiled at E3 2011, for a release in 2012.

The Wii U shares many forms of connectivity with the 3DS, as hinted by Nintendo developers, though none have been addressed. The upcoming Super Smash Bros. game will be on both systems, and will have connectivity.

On August 28, 2013, Nintendo announced that the Deluxe version of the system will receive a price cut, dropping it down to the price of $299.99, which will become effective on September 20. [1]

The console was first concieved in 2008, after Nintendo recognized several limitations and challenges with the Wii, such as the general public perception that the system catered primarily for a "casual" audience. With now Wii U, Nintendo looks to capatilize on the hardcore audience. Iconic game designer Shiguru Miyamoto admitted that with the lack of HD and a limited network infrastructure, the Wii was very "seperate class" from its competitors, the PlayStation 3, and Xbox 360, being those 2 consoles shared somewhat simular functions in hardware. It was decided that a new console would have to be made to accommodate significant structural changes.

The Wii U GamePad is the main controller for the Wii U. It features a built-in touchscreen, which can either supplement or replicate the gameplay shown on the main display, and can function as a standalone screen without the use of a television screen. The controller features an accelerometer, gyroscope, camera, dual analog sticks, a built-in microphone, and supports near field communication (which can be used for, among other uses, figurines that can interact with the console and wireless credit card payments with compatible cards).[66] The console will also be compatible with the Wii Remote Plus, Wii Nunchuk and Wii Balance Board, as well as a Wii U Pro Controller for more traditional controls.[67] Two GamePads are supported per console.[68]

Shigeru Miyamoto promoted the idea of the GamePad, stating that he supports being able to use a secondary screen while someone else is watching the television. Wii U is said to offer asymmetric competition, where the player using the GamePad has one experience and wins in a certain way, while competing players have different ways to play and win.

On the September 13, 2012 Nintendo Press Conference, Nintendo officially announced the Wii U's launch date in North America, as well as at launch, the Wii U will launch in 2 bundles/sets:

The Legend of Zelda (Wii U) being played on the console.

Video chat on the Wii U

Satoru Iwata holding the Wii U controller and Console 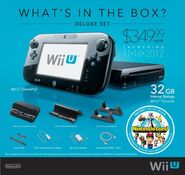 The Wii U deluxe bundle. 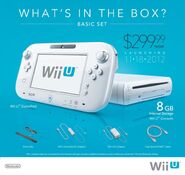 The Wii U Basic Bundle.