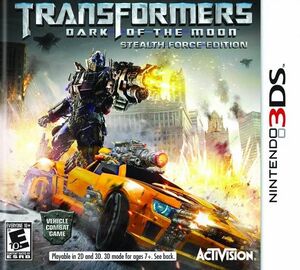 Transformers: Dark of the Moon is a video game adaptation of the third installment of the Transformers film series. The "Stealth Force" Edition is a version of the game exclusive to Wii and Nintendo 3DS, where the player can only play as a car, and not transform into the giant robots which the series is known for.

The game contains 18 stealth force missions where you battle against either Autobots or Decepticons (depending on which team you choose) in urban, desert and frozen locations. You can also convert to a Stealth Force hybrid form combining the weapons and firepower of robot mode with the agility and maneuverability of vehicle mode. The player cab choose from three distinct character class chassis and unique weapon load outs to create his or her own Transformers character. [1]

The game has received negative reviews.

Nintendo Life gives it a mere 40, stating "Blowing up cars is entertaining, but the game somehow manages to fumble this core concept with way too many irritations: dull graphics and repetitive missions and objectives are bad enough, but even they could be overlooked if the game's control scheme wasn't so bad. Transformers: DotM - SFE is over in just about four hours, but after struggling with its cumbersome controls, you may be thankful to say goodbye to this scrapheap." [2]

Nintendo World Report gave it the lower score of 30, simply saying: "The biggest problem with this is the controls." [3] 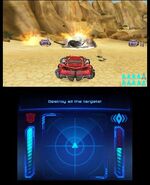 Retrieved from "https://nintendo3ds.fandom.com/wiki/Transformers:_Dark_of_the_Moon?oldid=9919"
Community content is available under CC-BY-SA unless otherwise noted.