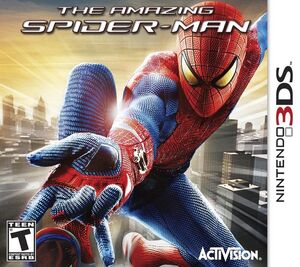 The Amazing Spider-Man is an upcoming superhero video game for the Nintendo 3DS. Set to tie-in with the upcoming motion picture, it is the second Spider-Man game for the system after Spider-Man: Edge of Time. Developed by Beenox and published by Activision, the game was released June 26, 2012 in North America and will be released June 29 in Europe. [1] A demo for this game was released on the Nintendo eShop on June 14. [2]

The game takes place after the feature film. Players control the titular character, Spider-Man, as he battles several villains such as Felicia Hardy, Rhino, and the Lizard around New York City. It also features a "Web Rush" mechanic, a mode that when activated while traversing, highlights major points of interest for travel, allowing Spider-Man to smoothly transition to it, making travel more stream-lined and simple. Unlike the console versions, it will not feature free-roaming. [3]

Retrieved from "https://nintendo3ds.fandom.com/wiki/The_Amazing_Spider-Man?oldid=11853"
Community content is available under CC-BY-SA unless otherwise noted.