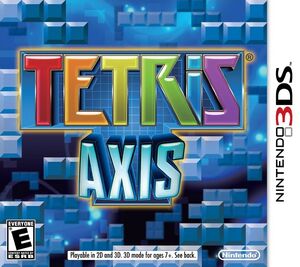 Tetris: Axis (known simply as Tetris in other territories) is a puzzle game for the Nintendo 3DS and an installment in the Tetris series. Developed by Hudson Soft, the game was released on October 2, 2011 in North America, October 20 in Japan, October 21 in Europe, and October 27 in Australia. [1] [2] [3] The game was published in North America by Nintendo, and by Namco Bandai Games in Japan.

The game features gameplay similar to other titles in the series, in which the player controls shapes made up of four squares. The objective is to create a horizontal line of ten blocks without gaps by rotating the shapes. This game features over 20 game modes, 8-person online and off-lime multiplayer, augmented reality modes, and supports SpotPass.

The game has received mixed to positive reviews. Modogo gives it a full 100, saying "Tetris: Axis is one of the sweetest 3DS games you'll find. It lacks the fun Nintendo themed stages that made Tetris DS unforgettable, but there's so much content, we doubt players will mind; and seriously, you should already own a copy of Tetris DS anyway." [4] Gaming Age gave it a 91, stating "The 3D stuff looks pretty great, and since Tetris doesn't involve much action, it doesn't tax your eyes like other titles might." [5]

Cheat Code Central gave it an 88: "A great selection of minigames, with awards, leaderboards, and decent multiplayer. A couple more online offerings would have given it a perfect score." [6] Official Nintendo Magazine gives it an 80: "A large collection of Tetris variations. Some are excellent, some forgettable." [7] Game Informer gives it the same score, reason being: "Tetris Axis is another bright spot on the puzzle series' legacy, but some of the aging modes trip things up for veterans. If you're a 3DS owner in the mood for core Tetris without extra experimentation, keep in mind that the eShop already offers Tetris Party Live for only $5." [8]

Nintendo Power gives it a 75, saying "With so many versions of Tetris already on the market, it's hard to say that Tetris Axis is a must-buy." IGN gave it the same score, stating "Axis' presentation just plain doesn't quite stack up to other versions on the market - most notable Tetris DS - and the uninspired use of Miis comes off as more lazy than fun." [9] Destructiod gave it a 70: "I liked the addition of dancing Miis and club-style classical music remixes, and the graphical presentation and 3D novelties were neat, but none of this really satisfied my craving to play some good ol' Tetris. Somehow the standard-ish Marathon mode wasn't doing it for me." [10]

GameSpot gives it a 70, as well, reason being "Tetris Axis delivers classic gameplay with lots of modes and options, but most of it is very familiar." [11] Nintendo Life does too: "Tetris Axis falls short of spectacular but still proves to be a worthwhile addition to the classic's illustrious handheld legacy with its expanded online component and oddly addictive Fever mode." [12]

1UP gives it a 67, saying "Personally speaking, Axis is unbearable: A hodgepodge of ideas with no aesthetic consistency. It includes practically every Tetris derivative mini-game to have been pushed out the door by various licensees over the past decade, both good and bad, making it a sort of omnibus. At the same time, the whole thing feels cheap and generic, and there's very little visual consistency from mode to mode." [13] Nintendo World Report gave it a 65, simply stating "It's just one of those games that really is best played in its original, simple Marathon mode." [14]

One of the most critical reviews, from Gameblog, had the game receive a score of 40: "This new version of Tetris adds nothing great to the good old formula. Augmented Reality is good fun for 5 minutes, but nothing here really overshadows Tetris DS, which was actually much more interesting and fun." [15] 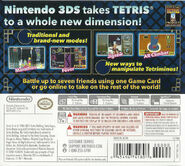 Back cover.
Add a photo to this gallery

Retrieved from "https://nintendo3ds.fandom.com/wiki/Tetris:_Axis?oldid=7973"
Community content is available under CC-BY-SA unless otherwise noted.