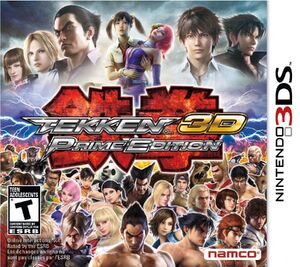 Tekken 3D: Prime Edition is a fighting game for Nintendo 3DS, and an installment in the Tekken series. The game was announced at E3 2011, with more information revealed at Gamescom 2011.

The game features over forty characters, new stages made specifically for the game, stages redesigned for the 3DS, and Wi-Fi functionality. [6] There are 700 in-game cards featuring artwork from the series for the player to collect, which can be exchanged through StreetPass. The game supports local and online multi-player modes, though the 3D effect is disabled in these in the latter in order for the game to run at 60 frames-per-second flawlessly. [7]

The game has several modes, such as "Survival", which tests how long one can keep fighting on one bar of health, "Quick Battle", in which one faces against 10 opponents and gains greater points based on the difficulty, "Practice" where one practices moves and skills for characters, and "Profile", where one can view records and edit characters. [8]

Tekken 3D: Prime Edition has received mixed reviews. Official Nintendo Magazine gave it an 81, and called it "a perfect, smooth version of a great fighting game, and not much else." [9] Nintendo Power gave it a 75, saying "From a purely technical standpoint, Tekken 3D Prime Edition is awesome - the graphics and gameplay are top-notch. But the overall lack of compelling solo experience keeps me from recommending this game more highly."

IGN gave it the same score, stating "Tekken 3D Prime Edition definitely gets props for recreating the fast combat and fluidity of the series on a handheld. However, the lack of any real depth in the modes and lack of customization features for your fighters makes it tough to want to spend an extended amount of time with it." [10]

Nintendo Life gave it a 70, calling it "a good if unspectacular Tekken transition. Its 41 characters and 60 fps frame rate is unmatched on 3DS, and while it arguably lacks a truly meaty challenge for a single player it's enjoyable enough that you won't really mind. It won't set the world alright, but it's another strong addition to 3DS's array of big name scrappers." [11] GameSpot gives it a 65, saying "Technical achievements set Tekken 3D Prime apart from other 3DS games in the genre. Visuals aside, it fails to meet expectations." [12]

GamesRadar gave it a 50, stating "Kudos to Namco Bandai for raising the bar on 3D fighters' frame rates, but beyond that, it's tough to get excited about a game that seems content with the bare minimum." [13] Nintendo World Report was critical, giving it a 45, and said "If you want to play Tekken against your friends locally on the go, then [it] is perfect for you. For anyone wanting a decent single-player experience or a consistent online experience, you're better off looking into one of the other fighting games on the system, as Tekken 3D Prime Edition fails both in a single-player experience and online." [14]

Retrieved from "https://nintendo3ds.fandom.com/wiki/Tekken_3D:_Prime_Edition?oldid=13721"
Community content is available under CC-BY-SA unless otherwise noted.