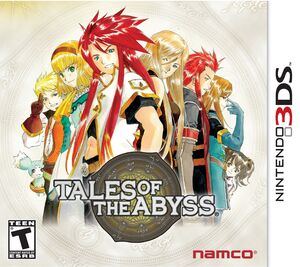 Tales of the Abyss tells the story of Luke fon Fabre, sole heir to a family of aristocrats, as he is suddenly thrust into the outside world on an epic adventure. Naïve and spoiled by years of isolation, Luke struggles to learn of friendship, sacrifice, duty and of choice. With the fates of many in his hands, Luke’s actions could ultimately save the world or bring about its very destruction.

The series’ trademark real-time battle system returns with increased mobility in the “Flex Range Linear Motion Battle System.” The updated battle system allows players to run in any direction while engaged in battle. Throughout the game, characters will learn AD Skills, acquired with the use of Capacity Cores, stat increasing items given out as characters level up. AD Skills can be equipped and unequipped at will during battles.

The battle system also introduces Field of Fonons, a special system that allows players to charge elemental attacks through repeated use. Once the Field of Fonons is charged, players can execute a technique that corresponds to the elemental alignment represented on the screen to create an upgraded, powerful version of the attack.

The game has received generally favorable reviews. Nintendo Gamer gave it a 90, calling it "a gorgeous title." Nintendo Life gave it an 80, saying "The 3DS doesn't yet offer much choice for those who favor lengthy adventures over quick-fix pick-up-and-play games. However, if you are such a person, Tales of the Abyss should quench your thirst." [8]

RPGamer gave it the same score, reason being "[it] is a very worthwhile addition to gamers' collections, and more than welcome on the 3DS' library. The removal of the technical issues is much appreciated and gives players the opportunity to experience the game at much closer to its full potential, where it easily earns the right to be spoken out in the same breaths as the more beloved entries in the series. Tales of the Abyss 3D is a very solid game all round, and the handling of characters' growth throughout the story should stick in one's memory for a good while." [9]

Official Nintendo Gamer gave it a 79, stating that it is an "Enjoyable Japanese RPG that, despite the graphical overhaul, is showing its age." [10] GamesRadar gave it a 70, saying "Despite the various quibbles with the port quality, Tales of the Abyss is still a superb RPG. It's got excellent combat, a secret-packed world to explore, and a wonderful cast of characters you'll come to love adventuring with." [11]

IGN also rating it this, stating "It's impressive that Namco-Bandai has managed to port a full-sized, voice-acted Japanese RPG to the 3DS without sacrificing any of the content from the PlayStation 2 version. But it's also a six-year-old game that hasn't aged well in all respects, and if you're a North American Tales fan, it's likely to be one you've played before." [12]

Nintendo Power did as well, saying "It's ultimately interesting enough to keep you playing until the end." GameSpot said "Tales of the Abyss is still an entertaining role-playing game, but poor 3D makes this handheld version slightly disappointing." [13]

Promotional image.
Add a photo to this gallery

One of the game's anime-like cutscenes. 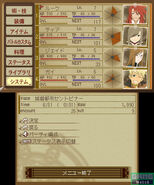 The game's screen after you've completed an mission.
Add a photo to this gallery

Retrieved from "https://nintendo3ds.fandom.com/wiki/Tales_of_the_Abyss?oldid=9870"
Community content is available under CC-BY-SA unless otherwise noted.