Swapnote (known in Japan as Itsuno ma ni Koukan Nikki[1], and in Europe as Nintendo Letter Box) was a messaging system for the Nintendo 3DS. It was released on December 22, 2011 in the Nintendo eShop, and is available for free. [2] [3] [4]

On October 31, 2013, Nintendo disabled Swapnote's SpotPass function in all regions, thereby eliminating the ability for friends to send messages to each other and players to receive Special Notes over the internet, due to active misuse of the application by some who had been exchanging offensive material, seemingly making the application to be rendered obsolete in the process. [5]

The system allows players to send 3D messages to their friends via the SpotPass and StreetPass features. Once sent, the receiver will receive them via SpotPass. If they are not online, they will get them as soon as they open up their 3DS. If they are online, they will get them instantly. Users can hand write messages, similar to Pictochat for the Nintendo DS, and also include pictures and sound from the Nintendo 3DS Camera and Nintendo 3DS Sound applications. [6]

Play Coins can be used to unlock new features and items, such as the design of the stationery or sounds from the Nintendo 3DS Sound. New stationery can also be unlocked after received notes using them. For those under thirteen years of age, their guardian must sign and verify the Online Child Agreement which puts the guardian accountable of the child's online actions before they can send messages per SpotPass. On July 5, 2012, an update released via the eShop allowed writers to change the color of ink used to red, blue, green, purple, and gold rather than just black. Another update followed on April 11, 2013 which enabled many different features like able to take photos and record recordings directly from the software. [7] 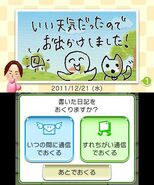 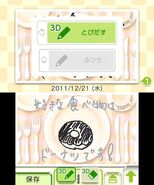 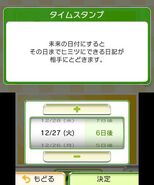 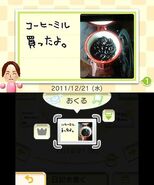 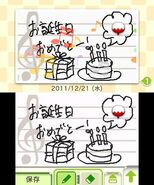 Retrieved from "https://nintendo3ds.fandom.com/wiki/Swapnote?oldid=19386"
Community content is available under CC-BY-SA unless otherwise noted.