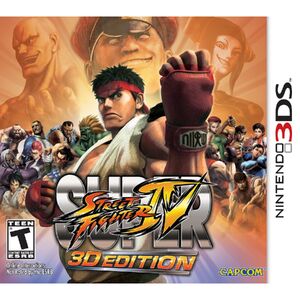 Super Street Fighter IV: 3D Edition is a fighting video game developed and published by Capcom for the Nintendo 3DS handheld game console. It was released as a launch game in all continents, but in Japan first on 26 February 2011. It is a port of the console game Super Street Fighter IV, originally released for the Arcade, PlayStation 3, Xbox 360, and PC in 2010.

Super Street Fighter IV: 3D Edition plays like most other Street Fighter games. You can play as a character, and the goal is to K.O. your opponent using a combination of hits and combos. It plays like a traditional fighting game, utilizing 3D backgrounds and 3D characters on a 2D plane. It has two primary modes: single-player and multi-player, the latter mode which supports both online and local play. The battles take place between two opponents, of whom each have their own health meter that the opponent has to deplete by attacking each other. Players win a match by either depleting the opponent's health or merely having more health after the time runs out. The objective is to win two times in a match. If the opponents are on equal standing when the timer runs out, it is considered a loss for both opponents; if this occurs twice in one match, it results in a draw. Characters can be moved around using the circle pad or d-pad, and combos can be unleashed by either touching the "1, 2, 3, or 4" numbered sections on the touch screen, or through pressing numerous buttons.

The game can be played in traditional "2D Mode" which has a side-scrolling feeling to it, or in new "3D Versus" mode, where you fight from an angle and can get a sense of how far away your opinion is with the depth of the 3D.

In SSFIV3D, the player has a variety of 35 different characters, which are originally from Street Fighter IV and Super Street Fighter IV, though the Arcade Edition and Ultra characters (Evil Ryu, Oni, Yun, Yang, Poison, Hugo, Rolento, Elena, and Decapre) are not present, though some downloadable content is being considered, though it is very unlikely.

3D Edition introduces a number of new features. One of the more prominent features is the use of stereoscopic 3D, as well as the support of the Nintendo Wi-Fi Connection, for which it uses the Nintendo 3DS' universal Friend Code to play online. As stated above, it utilizes the touchscreen to allow players to perform special abilities more easily, as well as the difficulty modes Lite and Pro. 3D Edition makes use of the 3DS' StreetPass function, which allows players to swap in-game figurines of characters that are unlocked throughout the game as well as use them in battle whenever the 3DS is in range of another player's 3DS who also has the game. The figurines have statistics, and players can make their own team of figurines for the aforementioned figurine battles.[3] Players are also able to share the game with others, who can play it without a copy of the game; however, players are only allowed to use Ryu in a single specific stage.[4] Players are also able to switch the view from the traditional 2D plane to an over-the-shoulder view, called Dynamic Mode, which presents the stereoscopic 3D better.

SSFIV3D has several modes: Arcade, Versus, 3D Versus, Internet Match, Challenge, Training, and Figure Collection, which uses the StreetPass feature.

Players use the Nintendo 3DS' circle pad or directional pad to control their fighters, which allows players to jump, crouch, and move toward and away from opponents. Players use the face buttons in order to performs techniques such as punches, kicks, grabs, and "personal actions." The touchscreen can also be used to use these personal actions, which displays multiple icons for each action, though its nature depends on whether players have the difficult mode set on "Lite" or "Pro"; on Pro mode, such moves have to be performed manually. Players may filter online play opponents; this depends on whether they are playing in Lite or Pro modes. It features abilities such as "Focus Attacks" and separate meters for both "Super" and "Ultra" combos. When in the single-player mode, if toggled on, there are additional "bonus stages" which allows a chance to receive additional points, similar to the ones found in Street Fighter II.

SSFIV is one of the most successful launch titles out of the 3DS lineup. IGN gave it a 8.5 out of 10 "Great", stating that it is "a great game. It's not only the best launch game for the Nintendo 3DS, but will certainly be regarded as a great purchase for years to come". [1]

Gamespot, also giving it an 85, says "What's most impressive about Super Street Fighter IV: 3D Edition is how few compromises have been made to the core gameplay in its transition to the 3DS. From the fantastic visuals to the speed of combat, it's as great a fighting game as you'll find on a handheld, encompassing most of the features of the console versions." [2]

Joystiq states "As good as any portable Street Fighter game can be. The touchscreen implementation, in fact, makes it a little better than that baseline, by adding an exclusive input method that actually works. It's no replacement for a genuine arcade button layout -- and you'll never forget that for a minute -- but it's a unique, and differently effective, way to interact with the game", and gives it a 90. [3]

Official Nintendo Magazine says "Easily the best fighter game on a Nintendo handheld and a must for fans of the series", and gave it a 91. [5] Yet another magazine, Game Informer, gave it a 90, stating "A complete game. Super Street Fighter IV is one of the best fighting games around, and players owe it to themselves to give it a shot."

The most critical review came from GAMES(TM) who gave the game a 60, reason being "Street Fighter IV: 3D Edition could arguably be the best portable version of the core series yet produced, but this is testament to the severely limited nature of what came before rather than any standout success on this game's part." [6] 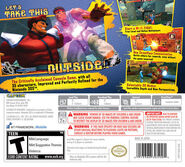