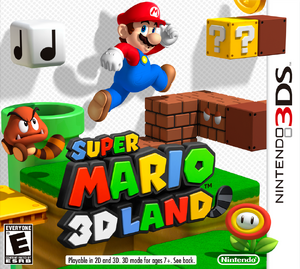 Super Mario 3D Land[1] (tentatively titled Super Mario) is a platforming game for the Nintendo 3DS. It is the first 3D Mario game in the series built from the ground up for a Nintendo handheld. It was developed by the same team that developed the Super Mario Galaxy games.

It was first mentioned in an interview called Iwata Asks, then fully unveiled at the Game Developers Conference, and later showcased at E3 2011. The game was released November 3, 2011 in Japan, November 13 in North America, November 18 in Europe, and November 24 in Australia to critical and commercial success, becoming the first 3DS game to sell over five million copies worldwide. [2] [3] [4] [5] It was later released as a digital download on the Nintendo eShop October 4, 2012 in Europe and October 18 in North America, and will be released November 1 in Japan on the service. [6] [7]

The game includes a system update that improves the Friend List by adding a "Join Game" option that allows the player to join an online game that a friend is playing, automatically moves friends who are online to the top of the list, and the ability to scroll through the list of friends quicker. [8]

It was confirmed at the Game Developers Conference that a Mario game for the 3DS was in development, tentatively titled "Super Mario." It "fulfilled the dream of Nintendo video game designer (and Mario creator) Shigeru Miyamoto to bring true depth and distance into the game’s mechanics." It was developed by the same team that worked on Super Mario Galaxy 1 & 2. [10]

The tail at the end of the "D" in the logo led many fans to believe that the Raccoon Suit from Super Mario Bros. 3 would make a comeback. [11]

Later, Miyamoto stated that the game was a cross between Super Mario 64 and Super Mario Galaxy. He also promised that the game would come out in 2011, and that it would be original. He also said "The tail you mentioned on the logo – it’s what you think it is. You probably know what’s going to happen using that character", meaning the raccoon suit most likely would return. Also, he teased that the game may have been playable at E3 2011. [12]

Miyamoto has also stated that the game was to be fully unveiled at E3 2011, and as of April 23, 2011, the game was under intensive development.

The game was later showcased at E3 2011, along with other first-party 3DS titles. The first trailer for the game was released, however, the tentative title remained the same. Gameplay was also shown, with graphics reminiscent of a mix between Super Mario 64 and New Super Mario Bros. The Tanooki suit was also seen in the trailer, confirming its existence.

A tree that stands on Princess Peach's castle grounds is stripped of all its leaves during a storm. The leaves, which turn out to be Super Leaves, are blown across the Mushroom Kingdom, bestowing Tanooki tails on all living things they touch. When Mario and the Toads go to inspect the tree the next day, they discover a letter from Bowser, learning that he has kidnapped Princess Peach. Mario sets off in pursuit to locate and rescue the princess.

The game features elements from the 2D side-scrolling and 3D platforming games in the Super Mario series. For example, staples from the 2D games, such as time limits and flagpoles are featured. Some levels have Mario running around in 360 degrees, like the 3D games. When Mario is hurt, rather than depleting a health bar as in the 3D games, he shrinks to a smaller size, ala the 2D games.

Mario also hits blocks, which are more prevalent in this game than past 3D games, and collects Star Coins, similar to the Comet Medals from the Super Mario Galaxy games. He can also pull of abilities from other 3D games, such as the wall jump, long jump, ground pound, and somersault.

Power-ups include the Super Mushroom, which increases your size, the Fire Flower, which enables you to shoot fire, the Star, which gives you temporary invincibility, and perhaps most famously, the Super Leaf, an item not seen since Super Mario 3 on the Nintendo Entertainment System, which turns Mario into Tanooki Mario, who sports a costume resembling a raccoon, and the ability to glide or smack enemies, such as Goombas or Koopa Troopas, with his tail. As well, Mario can turn into Boomerang Mario, which allows him to throw boomerangs, and Propeller Mario, in which he wears a Propeller Block over his head and can hover in the air using it.[13]

Elements from New Super Mario Bros. for DS are present in Super Mario 3D Land. The game includes a fixed camera system, slightly like the one seen in Super Mario 64, in which the camera does not move and Mario walks around on the screen, which helps demonstrate the depth of the 3D, and helps being dynamism to the staging of the game. [14]

The game makes use of the gyro-sensor, which can be used to replace the analogue stick by moving the device. [15] The game also supports StreetPass, which can be used to exchange items and other things with players. [16] After completing the game’s main stages, "StreetPass Time Attack" is unlocked, which allows you to race against people you’ve passed in regards to your completion time of the various stages. If you pass someone who does not have the game, you’ll receive an item, and if you pass them again, you’ll receive an even better item. [17]

Post game, there are eight unlockable bonus worlds, which can be opened by up one by one by collecting Star Medals. Players can also unlock Mario's younger brother, Luigi. As in previous games, he jumps wider and runs faster, but stopping his movements becomes slightly harder. He can be found in the first bonus world. [18] [19] The amount of content in Super Mario 3D Land is comparable to that of the Galaxy games, with the bonus stages almost equal in number to the game’s main stages.

On the review side, Super Mario 3D Land has received universal acclaim from critics.

Eurogamer Sweden gave the game a 100, saying "Super Mario 3D Land is a perfect blend between the new and the old. It's a near perfect piece of Nintendo entertainment and the best game in the series since the masterpiece Super Mario 64." [23] Guardian gave the game the same score: "The meticulous craft that has gone into its ingenious design is enough to warrant admiration from even those players who have no time for the portly plumber. As for the rest of you – and we're assuming you're Mario fans – you're in for a real treat." [24]

Digital Spy gave it 100, stating: "Mario's best handheld game in years, and even when put up against his acclaimed console offerings, it's yet another sublime adventure crammed with surprises and smiles every few minutes. It's also perhaps the first 3DS title that makes the screen an integral part of the game rather than an eye-catching afterthought." [25]

Gameblog says "A platformer of great quality, visually stunning, and offering an interesting architecture filled with funny and interesting details making a brilliant use of the stereoscopic 3D. It sure is a little too easy for the most part, probably because of it wants to remain as accessible as possible, making its first few levels a walk in the park for the fan, but its charms work nonetheless. It's hard to look elsewhere once you started diving into its worlds, before actually finishing them entirely... as expected, it's a must-have of the platform." [26]

Game Revolution states "Super Mario 3D Land is one of the best Mario games in recent memory. It's better than New Super Mario Bros. and just about on par with Galaxy. A few months back I stated that Ocarina of Time 3D was the premier reason to own a 3DS. That is no longer the case. Mario is still Nintendo's man to move hardware, even if he is a bit late to the party." [27]

Telegraph adds "The charm, inventiveness and knowing nods to Mario heritage bring constant smiles, and it's not only a superb Mario game but a fantastic advert for the hardware it appears on. A perfect starting point for newcomers to the series, or a nostalgic throwback for Mario die-hards that still manages to be incredibly contemporary. Whichever category you fall into, one thing's for sure; handheld platforming simply does not get better than this." [28]

Gaming Age has simply said "I'm literally floored by how much I enjoyed it, and I find it quickly rising in the ranks as one of my favorite Super Mario titles." GamePro states "The tired, princess-saving formula never seems to change, but somehow Nintendo makes every visit to the Mushroom Kingdom feel like the first time." [29] Nintendo World Report gave it a 95, saying "EAD Tokyo's 3DS debut is marvelous, and filled with almost endless creativity." [30]

IGN gave it the same score, and said "With an expertly balanced difficulty progression, dazzling level design and masterful Power-Ups, this is the ideal 3DS experience...As a whole, 3D Land is brilliant and addictive, and should do for 3D-enhanced platforming what the original Super Mario Bros. did for 2D platforming. If you own a 3DS system, you have no choice - you simply must own this game." [31] Game Informer states "Super Mario 3D Land isn't perfect, but the few complaints I have (like the lack of variety in boss fights and some re-hashed levels) can't bring down this entertaining mix of nostalgia and innovation. ﻿It lives up to the level of quality set by previous entries and is easily the best reason to own a 3DS." [32]

Official Nintendo Magazine gave it a 94, saying "Super Mario 3D Land is superb. The care and attention put into every aspect of it is beyond words and the only real problem point - the difficulty - is blown away by its remarkable post-credits reveal. This is the first truly essential, completely new title for the 3DS." [33]

Edge Magazine has given the game an 8/10. [34] Japanese Famitsu gave the game a 38/40, stating "The bits of the game that take advantage of 3D depth are a lot of fun, inspiring you to hunt around for all of the hidden stuff. There’s a wealth of helper functionality for beginners, and there’s also a lot of cute little touches to the game that will bring up twinges of nostalgia. The 3D space of this game is really well thought-out, allowing you to enjoy the 3D-based tricks while still feeling like a 2D Mario. It may just be Mario, but then, nothing is like Mario. The mix of discovery and surprise here is what you come to expect from the series." [35] The Nintendo Power magazine gave it a 9.0. [36]

Super Mario 3D Land was targeted by the People for Ethical Treatment of Animals (PETA). PETA has launched a mini-site stating that "tanooki may be just a "suit" in Mario games, but in real life, tanuki are raccoon dogs who are skinned alive for their fur. By wearing Tanooki, Mario is sending the message that it's OK to wear fur." The website in addition contains a mini-game where the player plays a tanuki chasing after Tanooki Mario in order to reclaim their fur from him.[37]

Nintendo responded to the PETA campaign, saying "Mario often takes the appearance of certain animals and objects in his games. These have included a frog, a penguin, a balloon and even a metallic version of himself. These lighthearted and whimsical transformations give Mario different abilities and make his games fun to play. The different forms that Mario takes make no statement beyond the games themselves."[38]

PETA made a final statement shortly after: "Mario fans: Relax! PETA’s game was meant to be tongue-in-cheek, a fun way to call attention to a serious issue, that raccoon dogs are skinned alive for their fur. We wish real-life tanukis could fly or swat enemies away with their tails and escape from those who profit from their skins. You can help them by never buying real fur."[39]