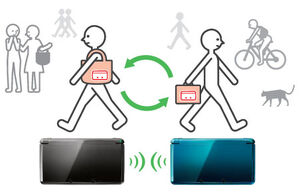 StreetPass is a feature in the Nintendo 3DS that, when passing by another 3DS, has the devices exchange data with each other, such as messages, Miis, friend codes, etc. You'll know you received a tag, when two or more systems "meet", when the LED notification light is flashing green.

The StreetPass Mii Plaza is an application for the Nintendo 3DS that basically houses all the Miis taken in from other 3DSes during StreetPass mode. You can also play some games by yourself and with other Miis from StreetPass here. You can also recieve some Miis via SpotPass.

Other things can only be viewed in the app. With Music Player, one can listen to music tracks from the games listed below. Acomplishments lets you see achievements you've received in StreetPassing.

Find Mii (StreetPass Quest): A simple RPG-type game. The system's main Mii (the one that is transferred through StreetPass connection) is trapped in a cage, and the player must gather other Miis to go through several locations until reaching a final boss which, when defeated, will free the Mii. Playable Miis can be purchased for two Play Coins; Miis that have been collected through StreetPass can also be used.

Find Mii 2 (also known as StreetPass Quest 2): The sequel to the above game, with similar gameplay and new locations. It was released in the December 6, 2011 system update. [1] It can only be played after all of the hats are collected in the regular Find Mii. Old team mates can also be purchased and perform combo moves with other knights that have gone into battle. The player can now also choose the direction on the map they wish to go.

Puzzle Swap: Players collect pieces for a puzzle that, when completed, form a 3D image. Pieces can be collected by using 2 Play Coins, or by taking pieces from Miis collected per StreetPass. New panels are also received per StreetPass. One can view completed puzzles in slideshow form as well as receive puzzles via SpotPass, also as of the December 6 update.

World Map: In the country you live in, you must try to fill out all the states or regions by going there and getting somebody's Mii via StreetPass. You can also get Miis from other countries if you meet someone else from another country such as someone from Jamaica comes to New York and you some how get him on StreetPass, it counts as a region filled.

Mii Force (also known as StreetPass Squad): The game is a shoot 'em up taking place in space, in which players Gold Bone Gang. It was released as DLC on the Mii Plaza in Japan and Europe on June 17, 2013 and in North America on July 11 and was developed by Good-Feel. [2]

Flower Town (also known as StreetPass Garden): Players move into a house in Leafington and try to become a Master Gardener, under the tutelage of Mr Mendel. You grow flowers and decorate your garden. It was released as DLC on the Mii Plaza in Japan and Europe on June 17, 2013 and in North America on July 11 and was developed by Grezzo.

Warrior's Way (also known as StreetPass Battle): Players rule a remote country in a wartorn land. Your butler, Wentworth, helps you build an army via Streetpass to battle other generals, with the ultimate goal of conquering the world. It was released as DLC on the Mii Plaza in Japan and Europe on June 17, 2013 and in North America on July 11 and was developed by Spike Chunsoft.

Monster Manor (also known as StreetPass Mansion): Players take the role of a detective trying to solve the mystery of a haunted house, helped by their assistant Ella Mentree. You work to uncover truth with the help of people you meet inside, battling enemies to reach the top floor. It was released as DLC on the Mii Plaza in Japan and Europe on June 17, 2013 and in North America on July 11 and was developed by Prope.

StreetPass Relay is a service that functions to increase the number of Miis received by StreetPassing in North America and Europe. It was announced at an analyst briefing at E3 2013. [3] StreetPass Relay points are located at Nintendo Zones, where when a user passes by it with their 3DS, it automatically stores the most previous six visits by other 3DS users from that specific Nintendo Zone onto their system, and then passes on their information to be received by other users once they pass by the same relay point.

Nintendo has announced that June 25th is the official StreetPass Day, for groups to organize and meet up at StreetPass-based events around the world on this day. Nintendo has set up a website to find locations. [5]