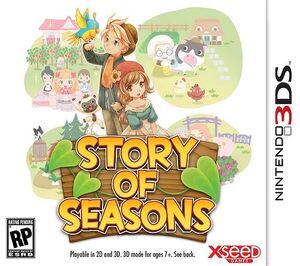 Story of Seasons (known as Harvest Moon: Connect to a New Land in Japan) is an upcoming farming simulation game for the Nintendo 3DS. It is the third installment in the Harvest Moon series on the system, following The Tale of Two Towns and A New Beginning, but isn't titled as such in North America due to Natsume owning the IP. [1] Developed and published by Marvelous AQL, it was released February 27, 2014 in Japan. It will be released sometime in 2014 in North America, published by XSEED Games. [2]

Retrieved from "https://nintendo3ds.fandom.com/wiki/Story_of_Seasons?oldid=18618"
Community content is available under CC-BY-SA unless otherwise noted.