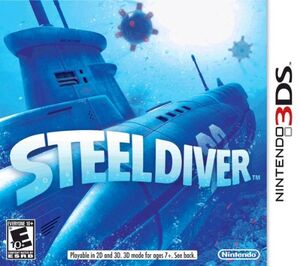 Steel Diver is a launch title for the Nintendo 3DS. It is developed by Nintendo. The 3D slider will be used to change the depth of the submarine. Steel Driver was released in Japan and America in February and March, respectively.

Use your Nintendo 3DS stylus to pilot a submarine and complete a series of increasingly challenging missions and Time Trial courses. You'll need to master all the functions of your submarine to succeed.

To move a massive submarine weighing thousands of tons is not an instant affair. Each action you take to steer or avoid obstacles must be planned a few seconds in advance. [1]

There are 7 different missions in Steeldiver but each mission has several things to do on them. Firstly you must complete the 5 starting missions with each submarine to unlock the sixth mission. When you have completed the sixth mission with all submarines you will unlock the final, daring mission. Also, you can challenge the time of the developers. The developers set a testing time in which you must complete to win a medal. A medal can be unlocked on each map by beating the time of the developers on each map. To challenge the developers you must set the ghost on before the mission. Each of your times will also be recorded on the leaderboards so you know your best 10 times on each mission.

Aswell as completing any of the 7 missions, you must also collect decals after each mission. Moving the 3DS to destroy submarines you collect 1 random decal each time you sink a ship. Each decal increases the submarines power in different ways, such as increasing torpedo damage or submarine speed.

There are 8 time trial map to test your skill, and how fast you are at controlling your submarine. Each time trial map has been given a difficulty out of 5 stars. 1 star being easiest and 5 stars very difficult. Each time will be recorded on the leaderboards. Like the missions, you can challenge the developers to earn a medal for that time trial. You may use decals to improve your submarine but decals can not be earned on time trial.

Joystiq gave it a 70, stating "Truth be told, its an extremely challenging side-scrolling ... well, it's part shoot-'em-up, part submarine simulator and part strategy game. The sum of these parts is actually a lot more compelling than the game taken at face value." [2] IGN, who gave the game that same score, had to say that "Well executed, but lacking in depth (which is ironic for a multitude of reasons). However, once you give it a fair shot, you'll be surprised how addictive the gameplay is and how much fun you'll have trying to master the controls and conquer each mission." [3]

GameTrailers gave it a 62, and noted "There isn't much to explore in Steel Diver's shallow waters. There are better ways to showcases the new hardware, even among the 3DS's sparse launch lineup. Only the most dogged would-be Nemo need apply." [4] GameSpot gives it a 45, reason being "This tedious underwater adventure is as short on content as it is on thrills." [5] Game Informer gave it the lowest score, saying "Maybe some gamers will be pulled into the aquatic world of Steel Diver despite the limited content, tech demo quality, and seemingly broken multiplayer. For the majority of Nintendo fans, though, it's destined to become a strange and forgotten footnote in the publisher's history." [6] 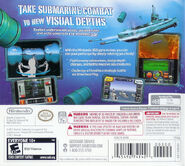 Retrieved from "https://nintendo3ds.fandom.com/wiki/Steel_Diver?oldid=8159"
Community content is available under CC-BY-SA unless otherwise noted.