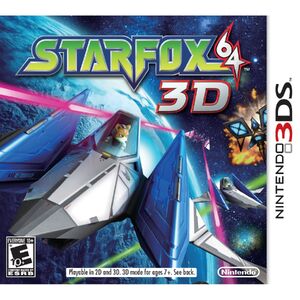 The protagonist of the story and the player character is Fox McCloud, a red fox and leader of the Star Fox team, who must save the Lylat System after his father, James, did years before the start of the game. The main antagonist of the game is Andross, a scientist from Corneria who was exiled to Venom after he nearly destroyed the planet. The Star Fox team are a group of mercenaries and they consists of Peppy Hare, a rabbit and member of the original Star Fox team; Slippy Toad, a frog and the mechanical and energetic expert of the team; and Falco Lombardi, a falcon and former gang member. Helping the Star Fox team on their quest to defeat Andross are General Pepper, a dog and leader of a militia force in Corneria; Bill Grey, a bulldog friend of Fox and commander of the Bulldog and Husky units; Katt, friend of Falco and former gang member of the same gang as Falco; and ROB 64 (known as NUS64 in the Japanese language version), a robot piloting the Great Fox, Star Fox's headquarters, who gives them support along their quest. Andross' henchmen includes the Star Wolf mercenary team, consisting of Wolf O'Donnell, Leon Powalski, Pigma Dengar (member of the original starfox with James McCloud) and Andrew Oikonny, Andross's nephew.

Star Fox 64 is set on a group of planets in the Lylat System. Ingenious scientist Andross, a native of the fourth planet Corneria, is driven to madness and nearly destroys the planet using biological weapons. For Andross' treason, General Pepper exiles the scientist to the remote planet Venom. Five years after Andross' exile, Pepper discovers an unknown activity in Venom.[1]Pepper hires the Star Fox team (consisting of James McCloud, Peppy Hare, and Pigma Dengar) to investigate. After arriving at Venom, Pigma betrays the team and causes James and Peppy to be captured by Andross. James eventually sacrifices himself, allowing Peppy to escape and tell James' son, Fox McCloud about his father's fate.

The team eventually invades Venom, where Fox defeats Andross, only to find that it is a false, robotic version of himself. He destroys it and returns to Corneria, leaving Andross in Venom. Fox eventually decides to confront Andross one more time, along with Star Wolf. Fox defeats Andross, who reveals his true form, a floating brain with two floating eyes.[2]After defeating the brain, James appears and shows Fox the way out. When he narrowly escapes, they return to Corneria for a victory celebration. When offered membership into the Cornerian Army, Fox declines on behalf of his team; saying "Oh no, sir. We prefer doing things our own way".[3]The game ends with the Great Fox and the Star Fox team flying off in their Arwings into the skies while doing barrel rolls.

After the credits, General Pepper receives a bill from Star Fox which presents the number of enemies killed and multiplies it by 64, resulting in the amount of money due. If the price is below $70,000 (1093 or fewer enemies killed) he will say, "This is one steep bill....but it's worth it." If the price is over $70,000, he says, in a rather shocked tone, "What?!" At this point, the player presses a button to stamp the bill, thus bringing the player back to the main menu.

The game features Nintendo 3DS and Nintendo 64 modes. The 3DS mode allows the player to use motion controls to control the ship in gameplay, while the N64 version is the same as the original Nintendo 64 gameplay. There is also a 4-player Battle mode that supports download play. [7]

The storyline and characters stay the same. For instance, Fox will be playable in his airwing, and he needs to dodge incoming ships and missiles while trying to reach the end of the course. Also, the bottom screen contains the list of controls for the game.

The Arwing is the primary craft used by the Star Fox team. The Arwing can use its boost meter to perform four special moves to avoid collisions and get the drop on pursuers: boost, brake, the U-turn, and the aforementioned somersault.

The Blue Marine, a submarine designed by Slippy Toad, is available solely on the water planet Aquas. The Blue Marine can upgrade its twin lasers, but it cannot make use of Smart Bombs. It makes up for this with an unlimited supply of torpedoes which not only damage enemies but also produce bright burst of light, allowing the player to see in the ocean depths. The torpedoes can also lock-on to enemies just as the charged up lasers can in the other vehicles. The submersible also has a shot-deflecting barrel roll in addition to boost and brake capabilities.

Star Fox 64 3D has received positive reviews, with a Metacritic score of 81, based on 64 reviews. Common complaints, though, include a lack of online multiplayer and that the game is too similar to the original, claiming new content should have been included. http://starfox.wikia.com 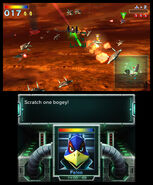 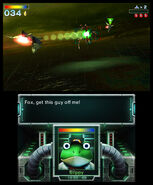 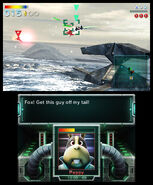 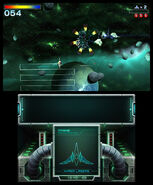 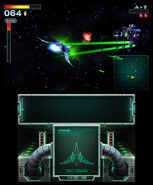 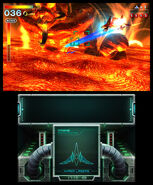 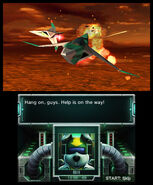 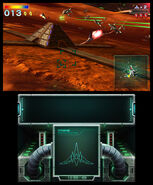 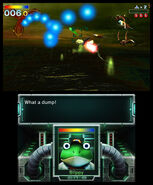 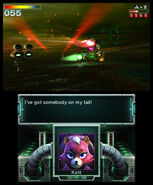