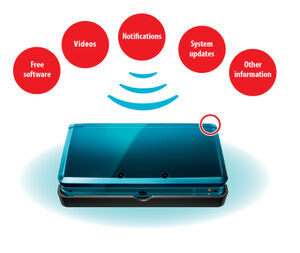 SpotPass (previously known as CrossPass) is a feature for the Nintendo 3DS. With it people can see various Nintendo-related media and movie trailers while also downloading things such as new levels for games.

When the 3DS is in Sleep Mode, the system can receive updates per SpotPass. Updates to applications such as the Nintendo eShop, Pokédex 3D, and Nintendo Video are achieved through this feature. Games can also use SpotPass to add new content such as levels, new playable characters and costumes, and other kinds of DLC. Your Nintendo 3DS system can automatically connect to a wireless internet access point. Once connected, special items will download automatically to your system via the SpotPass feature, even while in sleep mode. Some of these surprise items include exclusive content and promotions from Nintendo Zone™, unique 3D videos from the Nintendo Video™ service, and add-on game content from your favorite Nintendo 3DS games!

Not sure if you've received something? Look for the blue LED light on the outside of your Nintendo 3DS system or a blue dot on your favorite HOME Menu icon to find out what's been delivered to you.