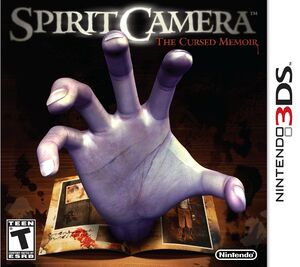 Spirit Camera: The Cursed Memoir, known as Spirit Camera: The Possessed Notebook in Japan and Fatal Frame: The Diary of Faces, is an augmented reality horror game for the Nintendo 3DS, and an installment in the Fatal Frame series. Co-developed by Tecmo Koei and Nintendo, the game was released in Japan on January 12, 2012, in North America on April 13, and will be in Europe on June 29. [1] [2] [3] [4]

The game is played using the included 16 page AR Book, called "the Cursed Memoir." By using the book in the story mode, players can decipher several mysteries contained within it.

Boss fights are played by waiting until almost all of the circles are lit up and, and the L or R buttons are pressed to take a picture and damage the boss, which will be inflicted with pain if taken correctly. The boss will take a corresponding amount of damage with the amount of circles lit up; the more circles waited to light up, the more damage that will be done to the the boss.

How well the picture is taken of the boss determines whether the snapshot will count as a hit. 2 health gauges are present while fighting the boss: a red indicates the player's health, and a blue which indicates the boss's health.

Spirit Camera: The Cursed Memoir has received mixed to negative reviews. IGN gave the game a 5.5, praising the concept of the game, but highly criticizing the game for being too short in Campaign (2-3 Hours), and that the extra content in the game is not enough to keep the game replayable.

Retrieved from "https://nintendo3ds.fandom.com/wiki/Spirit_Camera:_The_Cursed_Memoir?oldid=10852"
Community content is available under CC-BY-SA unless otherwise noted.