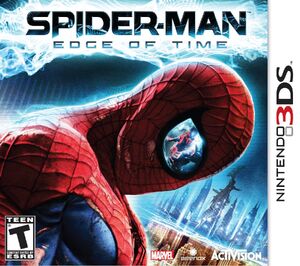 Gameplay is said to be similar to that of Spider-Man: Shattered Dimension, another Spider-Man game developed by Beenox that features the Spider-Men.

The game has been said to be almost identical to the console versions of the game in terms of story, level design, cutscenes, and so forth, although there is "an obvious horsepower gap between the 3DS and PS3 or Xbox 360", the developers managed to do a very respectable job of porting that console experience over to the 3DS. [2]

The game begins with Peter Parker/Spider-Man battling Anti-Venom, who suddenly kills him. Rewinding back to the starting of the event, in the year 2099 Miguel O'Hara/Spider-Man 2099 investigates Alchemax's scientist Walker Sloan. While spying on him, Miguel discovers Sloan's planning to travel back in time and found Alchemax in the past years before it was originally established, allowing him to rebuild the company in his own image and prevent its rivals from ever being established. Miguel arrives just as Sloan enters his Gateway, but jumps through the portal too late to stop him. Trapped between the timeline, Miguel sees visions of the original Spider-Man being killed by Anti-Venom as history alters around him.

Upon his return to 2099, Miguel (unaffected by the time change due to being trapped in the portal) discovers that Sloan's changes to the timeline have reduced New York City to a horrifying dystopia. Miguel then uses Peter Parker's DNA, stored within the company's archives, to create a chronal link with him, back in present day. He then warns Peter, now working for Alchemax in the genetics department instead of the Daily Bugle, about the events to come about his death in the Alchemax's building 66th floor. However, Peter refuses to obey his orders to leave the building if innocent people are in danger and travels to the 66th floor, only to find himself confronted by Anti-Venom, Sloan and Dr. Otto Octavius. Peter battles Anti-Venom, but is eventually severely wounded by him. Seconds later, Miguel pulls Peter through the Gateway in an effort to save him.

While sending Peter to the future to revive him, Miguel battles Anti-Venom and breaks the chip that is controlling him. Furious, Anti-Venom knocks himself, Sloan and Doctor Octopus into the time portal, merging all three into a monster that Spider Man dubs "Atrocity". Both Spider-Men are stuck in each other's timeline, with events accruing such as Mary Jane Watson's death and a confrontation with Black Cat 2099. In the future, Peter learns that he will become the CEO of Alchemax thanks to an anti-aging drug. He finds the portal and tries to enter it only for "Atrocity" to attack him. So, Peter lures him into a trap and takes his DNA samples so Miguel can analyze his DNA in the future, learning the truth.

Just as Miguel theories that forcing Atrocity back into the portal would disrupt and end the time storm, Miguel is contacted by the CEO Peter, who reveals that he intends to harness the quantum storm to rewrite his history and undo his past mistakes, remaking the entire universe in his image. After a final battle with the Atrocity and the "CEO", Peter and Miguel knock both of them into the gateway, the resulting release of quantum energy collapsing the bridge and ending the time storm, which also reverses the changes brought about by Sloan and the CEO, leaving no one but Peter and Miguel with any memory of them. Miguel then gives Peter a lecture on time travel, ending the game.

The Nintendo 3DS version was recieved poorly, even though scoring better than its console counterparts. IGN gave the 3DS version a 5.5 out of 10 (Mediocre), saying "Spider-Man: Edge of Time ultimately disappoints. It’s a step down from Shattered Dimensions, offering a less interesting plot, fewer Spider-Men to play as, and less fan service. As a finished product it just feels rushed. It should be noted that this review pinpoints many complaints that will ultimately be forgotten when in the midst of an epic web-swing. It's still an okay game, but largely because swinging around and beating up bad guys as Spider-Man will always be fun. That's really no excuse, though. Considering its strong foundation, Edge of Time simply should have been better."

For the consoles, the game has recieved mixed reviews. As opposed to the positive reception of Shattered Dimensions, with most complaints being the repetition, though the voice acting and story bared better reception. McKinley Noble of GamePro highly criticized the game pointing out it ultimately doesn't live up to Shattered Dimensions, only giving Edge of Time a fair amount of 3 out of 5. Joystiq was more critical, giving the game 2.5/5 and criticizing Beenox's misuse of the Spider-Man character. IGN gave "Edge of Time" a 4.5 out of 10. Gamespot gave the game a 6 out of 10, saying that it "tells an enjoyably absurd time-hopping tale, but stepping into the tights of its two heroes doesn't feel as empowering as it should." Gameinformer gave it a 6.5, saying "Edge of Time is a major step back from the formula that worked.". Destuctoid gave the game a 5 out of 10.[1]Gametrailers gave the game a 5.4 out of 10, praising the Story and voice acting, but criticizing the repetition of the gameplay. On the other end of the spectrum, Game Chronicles gave the game a very positive review, stating that "Edge of Time excels in every aspect of game design with solid combat, fun navigational puzzles, and one of the best cinematic presentations of any Spider-Man game to date" and awarding it a score of 8/10.

Retrieved from "https://nintendo3ds.fandom.com/wiki/Spider-Man:_Edge_of_Time?oldid=9935"
Community content is available under CC-BY-SA unless otherwise noted.