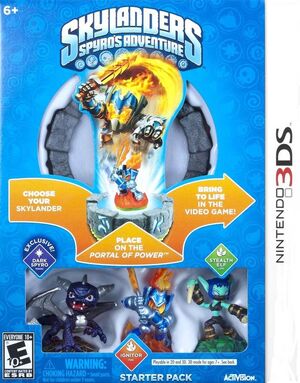 Skylanders: Spyro's Adventure is a spin-off game in the Spyro series of platform action games. Developed by Vicarious Visions and published by Activision, the game was released October 14, 2011 in Europe and October 16, 2011 in North America, for the Nintendo 3DS, as well as Wii, PlayStation 3, and Xbox 360. The set comes with three figures: Dark Spyro, an exclusive figure, Ignitor, and Stealth Elf.

In the game, players take on the role of a powerful Portal Master who can control over 32 different characters, including the fire-breathing dragon, Spyro. Players embark on a fantastical journey into an amazing world, where they explore mysterious, mythical lands, battle menacing outlandish creatures, collect gold and treasures, and solve interesting puzzles while on a quest to save their world from Kaos, an evil Portal Master, that they must defeat. [1]

Each version of the video game comes with 3 action figures and a peripheral called the "Portal of Power", which connects to the player's 3DS via the IR connection. Each action figure represents one of 37 playable characters, including Spyro, each with unique abilities. The playable characters become unlocked when their corresponding action figures are placed on the Portal of Power. Additionally, two figures can be placed on the portal simultaneously, for cooperative or versus play. The Nintendo 3DS's Portal Of Power can only house one figure at a time. Additional Skylanders can be purchased for $8 in a single pack, or a 3 pack costing $19.99.

The game has received positive reviews.

Nintendo World Report gave it a 90, saying "You can't knock the quality of the game, as Vicarious Visions not only made an awesome 3D platformer, they made a great 3DS-exclusive title." [2] Cheat Code Central gave it an 82, stating "There's good deal of content when compared to other 3DS titles. But with such much offered in the console version, it feels like more could have been added here." [3]

Nintendo Life gives it an 80, and says "A near-perfect conceptual marriage of toys and video games. While wallets may shudder at the thought of throwing down potentially lots and lots of money for the complete experience, what you get out of the box is a well-crafted adventure and world that kids of all ages can be excited about." [4]

Retrieved from "https://nintendo3ds.fandom.com/wiki/Skylanders:_Spyro%27s_Adventure?oldid=9813"
Community content is available under CC-BY-SA unless otherwise noted.