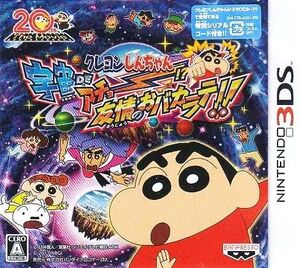 Crayon Shin-chan - Uchuu de Achoo!? Yuujou no Oba-Karate!!, otherwise known as Shin Chan 3D, is a platformer for the Nintendo 3DS. Based on the Crayon Shin-Chan anime series and developed for its 20th anniversary, the game was released on December 1, 2011 in Japan. [1] [2]

Retrieved from "https://nintendo3ds.fandom.com/wiki/Shin_Chan_3D?oldid=10073"
Community content is available under CC-BY-SA unless otherwise noted.