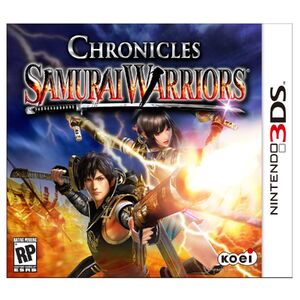 The best score has come from Gaming Age, who gave it an 83, because "Even if you're not a big Dynasty Warriors fan, there's a whole lot to enjoy here, and while the combat can grow a bit stale, the way the touch screen stuff is implemented really speeds up the battles compared to the home console titles." [1]

Official Nintendo Magazine gave it a 66, and stated "The slowest of slow-burners, yet it offers a huge challenge that deserves better and more varied combat and AI." [2] Game Informer, giving it a 50, simply saying "Chronicles' biggest problem is its repetitive combat." [3]

The most critical review came from Metro GameCentral who, giving it a "30", had this to say: "Probably the least surprising game on the 3DS, but even if you do like Dynasty Warriors games this is still one of the lesser spin-offs." [4]

Retrieved from "https://nintendo3ds.fandom.com/wiki/Samurai_Warriors:_Chronicles?oldid=8236"
Community content is available under CC-BY-SA unless otherwise noted.