Prior to the Nintendo 3DS's release, Nintendo needed a way to present the 3D effect of the device to players, since the effect should only be seen in person. Their answer was to set up retail demo units at stores, and kiosks at various locations for pedestrians to come and try out the Nintendo 3DS for themselves. 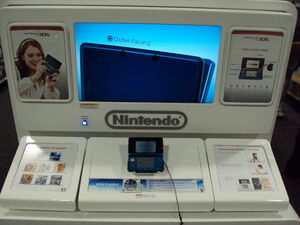 Retail units can be found at stores such as Best Buy, Wal-Mart, Target, and GameStop. These usually have an Aqua Blue Nintendo 3DS tethered to a magnetic stand with a black cover of the back preventing game cartridge insertion. The stylus is also tethered to the back of the 3DS and kept on a wire. In the front of the stand is a screen that basically details the 3DS hardware. To the left and right of the screen are pictures of a woman playing the 3DS (left) and an anatomy of the device (right). To the left of the 3DS is a gallery of some 3DS launch titles, and to the right are also instructions, similar to the space above it.

Retail units are only packaged with a demo version of Pilotwings Resort or Super Street Fighter IV (at GameStop). The home menu can also be accessed, though ways of doing so are often disputed. You cannot simply press the Home button, it does not work. Some say you must turn off the 3DS, press "L, R, select, and start", and turn it on, to which you will see two options: one regarding StreetPass and the other to turn the system off. Pressing the "home button" would take you to the home menu. Others state that all that has to be done is turn off and on the 3DS, and the two options are shown, to which you then press the home button and are taken to the screen. Both methods are proved successful. 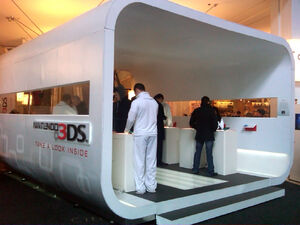 The other method of 3DS try-outs were through kiosks (also known as demo pods) placed in 4 American cities: New York City in New York, Chicago in Illinois, Los Angeles in California, and -- also in California -- San Francisco. These demo units were more extravagant than the retail demo units, and included numerous sections within the pod. In each section was a 3DS along with demos to play. More of the launch titles were playable, most of which were not playable at the retail units, leading to the demo pods to be unique and sport more visitors.

Monitoring the action were employees wearing "Nintendo 3DS" jumpsuits, making sure that everything was all right. After testing out the 3DS, numerous visitors were often impressed and went to preorder their system online or in stores. Preorder rates for the device soared thanks to the help of the Nintendo 3DS kiosks.

Retrieved from "https://nintendo3ds.fandom.com/wiki/Retail_demo_units_and_kiosks?oldid=5095"
Community content is available under CC-BY-SA unless otherwise noted.