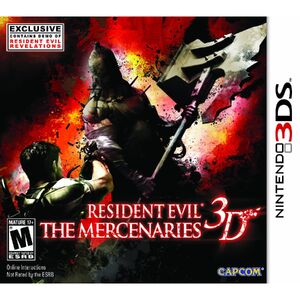 The camera of the game is set behind the player, moving through real-time rendered 3D environments. Unlike most other games in the series, players have the option of aiming from a first-person viewpoint, although the over-the-shoulder aiming from Resident Evil 4 and Resident Evil 5 is also available.

Another feature is the ability to move while aiming, reloading weapons, and recovering health. Gameplay is shown on the top screen of the Nintendo 3DS, while inventory management is handled on the touch screen. Players are able to customize their characters' abilities and weapons load-out by obtaining "Skill Points" and "Rankings" based on their gameplay performance. [6]

The game also features alternate costumes for each character to unlock. [7] The game includes Wi-Fi connectivity for cooperative play from players around the world, as well as new modes and characters from across the series.

Mercenaries 3D is not a canon entry in the series and therefore has no official story. Rather, the game is gameplay driven, where players aim to gain the highest scores possible by surviving against relentless waves of enemies under various circumstances. Playable characters from throughout the series include: Chris Redfield, Jill Valentine, Albert Wesker, Claire Redfield, Jack Krauser, Barry Burton, Rebecca Chambers and HUNK, competing in maps from Resident Evil 4 and Resident Evil 5.[1]

Before the game's release, there was a lot of confusion over why series mainstay Leon S. Kennedy was not playable. In an interview, producer Masachika Kawata jokingly states Leon's absence is due to his appearance in the upcoming Resident Evil: Operation Raccoon City, but mentions that including Leon (and other features) as future downloadable content is not out of the question.

The game received an initial controversy upon release when it was discovered that the game's save data could not be erased.[10] This implied that Capcom was attempting to curb the used-game market. Although Capcom VP Christian Svensson claims this feature was not a business decision, he states that a similar feature will likely not be implemented into future games because of the controversy it has generated.

Thus far, the game has received mixed to positive reviews from critics. NGamer wrote the first review and gave the game a score of an 82%. Tech Digest gave it a score of 5/5, saying, "A few key gameplay improvements over the first versions and superb visuals make this the second must-have 3DS title in as many weeks." IGN gave a less positive score of 6.5, stating while the gameplay is enjoyable, there's not enough content and that it was "designed to be an extra, not a retail release." Game Informer was very positive in their review, giving the game an 8/10 and even stated while there are some flaws, "It is the most thrilling handheld console experience I've ever had." Destructoid gave the title a 6 out of 10 rating, stating "There is fun to be had but is far too expensive for something like this." Joystiq gave the title a 2.5 out of 5 star rating, stating that "It could have been an addictive mission-based multiplayer title perfect for a portable platform, but with its limited content and quickly tiresome combat, Mercenaries 3D is little more than a fully-priced proof of concept." Nintendo World Report gave the game a 9 and said that "If you're looking for a portable-optimized intense high-score game centered around killing zombie-like enemies, this fits the bill." 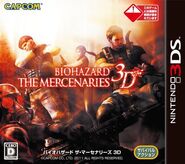 Retrieved from "https://nintendo3ds.fandom.com/wiki/Resident_Evil:_The_Mercenaries_3D?oldid=13712"
Community content is available under CC-BY-SA unless otherwise noted.