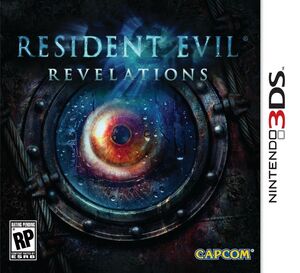 Another demo for the game was released on the Nintendo eShop on January 19, 2012, which can only be played 30 times. [5] If pre-ordered at GameStop, buyers will receive a protective case for their system. [6] The initial shipment of the game's cases have the spelling error "Revelaitions" on its spine, to which Capcom has offered to give a replacement insert. [7] [8]

The game sees a return to the survival horror gameplay of earlier series installments, with returning elements such as a limited supply of ammunition, and more emphasis on exploration and puzzle solving. [11] As in Resident Evil 4 and 5, the game's camera keeps an over-the-shoulder view from behind the playable character. [12] The player may move the protagonist while aiming a weapon, and has the option to switch between a first-person and third-person perspective. [13] A new item, the Genesis scanner, detects invisible items hidden throughout the game's environments, such as additional healing items, weapon upgrades, and ammo. Additionally, filling a meter by scanning enemies rewards the player with free healing herbs.[14]

The title's main story mode lasts for over 10 hours, and after that is completed, "Raid Mode", which supports multi-player both local and online, will be unlocked, which allows one to play as characters who aren't available in story mode. [15] [16] After beating the game once, "Hell Mode" is unlocked, which ups its difficulty. [17] StreetPass is also used to obtain items from other people in the story mode, while in Raid Mode, it allows you to gain new enemies and missions. [18] The game also supports the Circle Pad Pro, being bundled with it in Europe. [19] [20]

In the 3DS community, the game's graphics have been praised for being one of the most among the system's software.

Famitsu gave the game a 39/40. [21] Game Informer gave it a 9 out of 10, [22]praising the game's impressive visuals and brooding atmosphere, while also claiming that the game's story was one of the best in years. They criticized the game's lack of enemy variety in comparison to other games in the series, and stated that BSAA agents Quint and Keith are the worst characters in the series' history.

IGN gave the game an 8.5/10. IGN's Richard George praised the game's gameplay, but criticized the story. GameSpot gave the same score as IGN, praising the game's visuals and entertaining story.