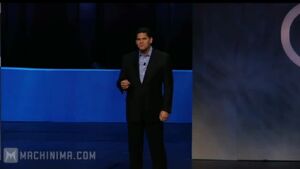 Reggie Fils-Aime was the President of Nintendo of America from 2006-2019. He has advertised the Nintendo 3DS numerous times.

Reggie was born on March 25, 1961 to Haitian immigrants who had just moved to America. He attended Brentwood High School in New York and later graduated, and was accepted into Cornell University in 1979. [1] While there, he was not only a member of Phi Sigma Kappa, but also earned a Bachelor of Science in Applied Economics (1983).

After received said degree, he took a position with P & G, and later became the Senior Director of National Marketing at Pizza Hut. He then became Senior Vice President of Panda Management Co. He also later became Senior Vice President at VH1, gaining popularity for refocusing the channel's content to younger viewers. While there, he met girlfriend Stacey Sanner, who is with him to this day. Prior to meeting Sanner, he was married and had three children, but later got divorced.

Reggie came to Nintendo first as the Executive Vice President of Sales and Marketing in December 2003, responsible for all sales and marketing activities for Nintendo in the United States, Canada, and Latin America. On May 25 of 2006, Reggie became the President and Chief Operating Officer of Nintendo of America after former president, Tatsumi Kimishima, moved to his new role as Chairman of the Board and chief executive officer.

Reggie shot to fame when he introduced himself to the audience at Nintendo's E3 press conference:

His antics on stage contributed to him gaining a cult following and gamers calling him the "Regginator", and many images of him spreading across the internet afterward. [2] He is thought for being responsible for putting Nintendo back in the public eye of America, as many fans and press label his arrival as the "Reggielution" (a combination of "Revolution", the Wii's codename, and "Reggie"). As well, at E3 2007, Fils-Aime demonstrated the use of Wii Balance Board used in the game Wii Fit. Before stepping on it, he proclaimed: "My body is ready", which sparked an internet meme.

Reggie appeared alongside Nintendo of Japan President Satoru Iwata at E3 2010 to unveil the Nintendo 3DS, and also starring with Iwata and Shigeru Miyamoto in a promo trailer for the 3DS which exaggerated its ability to "pull people into the game."

Retrieved from "https://nintendo3ds.fandom.com/wiki/Reggie_Fils-Aime?oldid=20035"
Community content is available under CC-BY-SA unless otherwise noted.