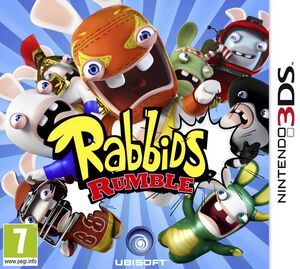 Rabbids Rumble is an upcoming game for the Nintendo 3DS, and the second Rabbids title on the system after Rabbids: Travel in Time 3D. Published by Ubisoft, the game will be released November 2012. [1]

The game consists of traveling through seven worlds and engaging in turn-based battles in order to capture over one-hundred Rabbids. There will also be a multiplayer mode, mini-games that use both the 3D and augmented reality features of the 3DS, as well as StreetPass and SpotPass support. [2]

Retrieved from "https://nintendo3ds.fandom.com/wiki/Rabbids_Rumble?oldid=11472"
Community content is available under CC-BY-SA unless otherwise noted.