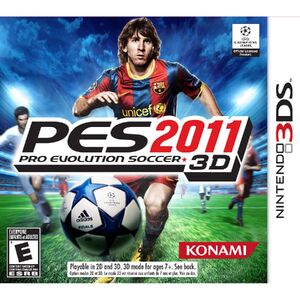 Pro Evolution Soccer is a launch title for the Nintendo 3DS. It is the first ever soccer game on a handheld console to be shown in 3D. The game has many similar features to the normal version however is improved with better graphics, a new player camera and the StreetPass function.

The game uses StreetPass mode to make you team used in Masters League to play against other teams when you pass other people. The games are won or lost depending on statistics and you do not actually play. You do not win prizes from these matches but it will increase your Streetpass ranking on the game.

Pro Evolution Soccer was given a score of 78% by Official Nintendo Magazine, which said the game was "compulsive and challenging" although "old flaws remain".

Retrieved from "https://nintendo3ds.fandom.com/wiki/Pro_Evolution_Soccer_2011_3D?oldid=8232"
Community content is available under CC-BY-SA unless otherwise noted.