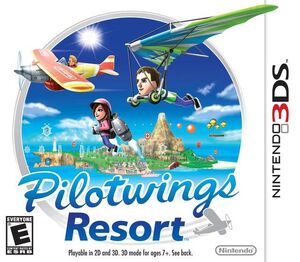 Players must travel around the island in their planes to complete many different tasks. The graphics are greatly improved upon compared to its prequels, and of course, the 3-D quality of the Nintendo 3DS will be used in this game. Finally, the game will be developed by Nintendo. Also, a map of the island will appear on the bottom screen.

It is also used as a demo for demo units of the Nintendo 3DS.

Pilotwings Resort contains two modes of play. The first, "Free Flight Mode," allows the player to freely explore Wuhu Island using any type of aircraft. Various collectible such as balloons and stunt rings can be picked up to unlock certain features in the game, but there is a time limit. The second, "Mission Flight Mode," requires the player to complete a series of objectives within certain parameters. These increasingly difficult missions span Training, Bronze, Silver, Gold and Platinum classes. The player is graded between one and three stars on their performance in each mission. [1]

Official Nintendo Magazine gave the game an 81, stating "While this looks and feels amazing, there just isn't quite enough of it." [2] Nintendo World Report gave it one point lower, saying "The subtle ways that the 3D affects the gameplay, combined with the excellent controls and mission variety, makes for a great experience." [3] Joystiq and Eurogamer also gave the game this same score, stating "Taken in "shotgun" form, Pilotwings Resort's difficulty curve seems harsh, and the game stressful. But if you enjoy a few missions at a time, perhaps going back through them to refine your score and your abilities, you'll get a better sense of the relaxation and freedom that comes from taking to the skies" [4] and "As an updating of an old favourite, this is a lovely piece of work; as a friendly shoving-off for a strange new handheld, it's wonderfully judged." [5]

IGN gave it a lower score of 70, saying "For its effective use of 3D gameplay and its simple yet refined design, PilotWings deserves a good deal of credit." [6] Edge Magazine gave it the lowest score of 60, grimly saying "One of the 3DS launch line-up's visual standouts: colourful, crisp and with horizons that have never looked so distant. It's disappointing, then, that you'll discover its limits so quickly." [7] 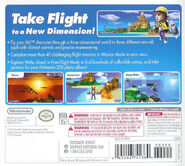 Retrieved from "https://nintendo3ds.fandom.com/wiki/Pilotwings_Resort?oldid=8276"
Community content is available under CC-BY-SA unless otherwise noted.