Photos with Mario (known in Japan as Photo Together with Super Mario) is a photography application for the Nintendo 3DS, released through the Nintendo eShop. Developed by Nintendo EAD, it was released in Japan on April 23, 2013 in Japan and in North America on May 18, 2014, though the latter's eShop page incorrectly listed its release date as July 9, 1981 at launch. [1]

Players use the 3DS's camera and augmented reality capabilities to make Mario characters appear on specially-themed cards, which can be photographed. The application also features the ability to drag the characters away from the cards and place them elsewhere for a photo. The player can also cause special effects to happen on-screen, such as blowing bubbles and causing a shower of stars, and changing the scene's lighting with the use of several buttons. 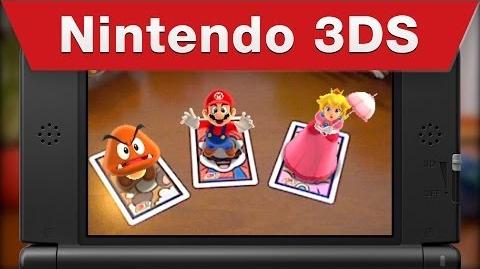 Photos with Mario - Trailer
Trailer
Add a photo to this gallery

Retrieved from "https://nintendo3ds.fandom.com/wiki/Photos_with_Mario?oldid=18566"
Community content is available under CC-BY-SA unless otherwise noted.