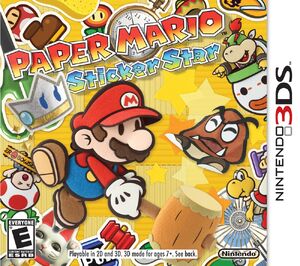 Paper Mario: Sticker Star (tentatively known as Paper Mario) is a role-playing game for the Nintendo 3DS, and an installment in the Paper Mario series. Developed by Intelligent Systems and published by Nintendo, it was released November 11, 2012 in North America, December 6 in Japan, December 7 in Europe, and December 8 in Australia at both retail and on the Nintendo eShop. [1] [2]

The game takes place during the Mushroom Kingdom's annual Sticker Fest. Bowser decides to scatter six Royal Stickers throughout the kingdom, leaving Mario to team up with a sticker fairy, Kersti, to help recollect the Royal Stickers, which are now stuck to Bowser and his minions. [3]

The title's gameplay and graphics return to the style of the first two Paper Mario titles for Nintendo 64 and Nintendo GameCube, as opposed to the new direction presented in Super Paper Mario for Wii. Stickers play a major role in the game, and are used as items and attacks during battles. Outside of battle, they can be used in the environment to open new areas in order to progress. Stickers can be peeled off the environment, bought in a shop, or made by the player.

The game was officially announced at Nintendo's E3 2010 event in trailer form on June 15, 2010. Second and third trailers were shown off at Nintendo World 2011 in Tokyo, Japan and at E3 2011. A more recent trailer, shown at at the 2011 Nintendo 3DS Conference, was later distributed, in 3D form, on the Nintendo 3DS through the Nintendo eShop in North America, Japan, and Europe. Nintendo had since remained quiet about the game, as the same development team working on it had been working on Pushmo and Fire Emblem: Kakusei. The game was shown off during E3 2012 with its final name, Paper Mario: Sticker Star. [4] [5] [6] 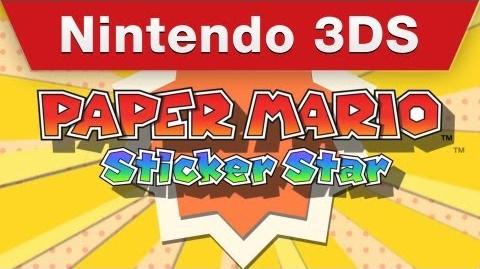 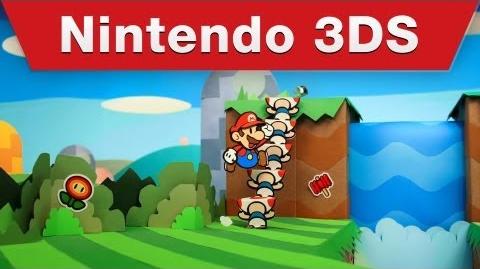