The Nintendo eShop is a shopping application for the Nintendo 3DS where a person can buy and download Nintendo 3DS titles, DSiWare, Virtual Console games, and more. It was released in a system update on June 6 in North America, and the following day in Japan. [1]. An update released on December 9, 2013 allows users to merge their 3DS eShop account with their Wii U's and combine their balances. [2] [3]

Nintendo 3DS Download Software (as it is referred to in the 3DS's instruction manual and on the Wii's "Nintendo Channel"), previously known as 3DSWare, is the Nintendo 3DS's main downloadable content. Similar to that of WiiWare for the Wii, and DSiWare for the Nintendo DSi, these are games made specifically for the 3DS, available per online purchase. Nintendo 3DS Download Software uses the 3DS's abilities (3D effects and gyroscope) to create unique experiences for players, similar to how WiiWare used the Wii's motion sensors and DSiWare used the DSi's touch control. 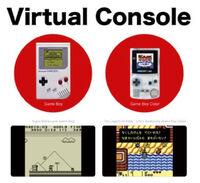 The Nintendo 3DS has a Virtual Console service, similar to that of the Wii. This will allow players to download old Game Boy and Game Boy Color games and play them on the system. Game Boy Advance games will also be exclusively available to early adopters of the 3DS per the Ambassador Program. Demos of Super Mario Land and The Legend of Zelda: Link's Awakening DX were shown. [4] 6 Classic games (such as Exitebike and Xevious) are remastered in 3D for release.

It was later announced that Sega Game Gear and TurboGrafx-16 games would also be on the 3DS's Virtual Console. [5]

Nintendo Show 3D was a series on the Nintendo eShop, similar to that of Nintendo Week on the Wii's Nintendo Channel. [6] Hosted by Jessie Cantrell, each episode of the show showcases upcoming 3DS titles, both retail and available for download. [7] It aired its last episode on March 28, 2013.

The show often begins with the host greeting the watcher and giving an overview of what that episode will foretell. After two or three retail games are featured, a "Download This" segment is shown, showcasing download software on the eShop. Subsequently, a "Nintendo Show 3D Exclusive" is shown, which shows a clip from an upcoming game that can only be seen on the show. After the host ends the main show, clips of random filmed events are played which make use of the 3DS's pop-out effect.

With the December 6th system update, demos can be downloaded from the eShop. By going to the "Nintendo 3DS Retail Games" section, and clicking on a game, you are taken to a screen that shows you the information of the game and also allows you to watch videos. In addition to these will be an icon that says "Download Demo", which, when tapped, will begin downloading onto the system's SD card.

Demos can only be played up to 30 times (in some cases less), after which they will be locked. Demos for games such as Monster Hunter Tri G and Dead or Alive: Dimensions were available in Japan when the system update took place. [8] On January 19, 2012, North America and Europe received their first demos, Resident Evil: Revelations for NA and Revelations and Cooking Mama 4: Kitchen Magic for Europe, with more to come in subsequent weeks. [9] [10]