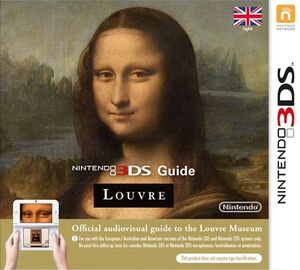 Nintendo 3DS Guide: Louvre is an application for the Nintendo 3DS. Originally, it began as a piece of software made available solely at rentable 3DS units at the Louvre museum in Paris, France, acting as a guide for visitors since April 2012. [1]

A home version was announced in a Nintendo Direct and was released on the Nintendo eShop in Japan, Europe, Australia, and New Zealand on November 27, 2013, and in North America on December 2. [2] [3] A packaged copy is also available exclusively at the Louvre's gift shop.

The app allows players to take a virtual tour of the museum. It also includes over 600 photographs of artwork, certain ones in high-resolution, 3D models of sculptures, 30+ hours of audio commentary, and more than 400 photographs of the Louvre itself.

Logo.
Add a photo to this gallery 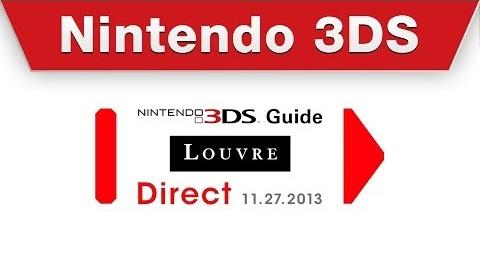 Retrieved from "https://nintendo3ds.fandom.com/wiki/Nintendo_3DS_Guide:_Louvre?oldid=17013"
Community content is available under CC-BY-SA unless otherwise noted.