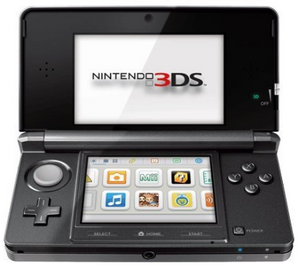 The Nintendo 3DS is a handheld video game system. It succeeds the previous line of Nintendo DS systems. The device's main attraction would be its use of glasses-free 3D effects (thus ushering in the name 3DS), as well as its motion controls.

(Detail previous endeavors of Nintendo into the third dimension, prior to the 3DS)

(Detail Nintendo E3 conference, all things that happened pertaining to the 3DS, and info/games announced afterward)

(Detail info is given at September 29 Nintendo press conference)

(Detail info is given at January 19 conference)

(Detail hype building up to 3DS launch, such as launch parties, people [such as Triforce Johnson] lining up at GameStop, etc., to get 3DS at midnight, and so forth)

The Nintendo 3DS has many abilities compared to its predecessor, the Nintendo DSi. For one, it includes a circle pad for more precise gameplay. Another new feature is higher quality graphics, as well as internet capabilities. The system itself is about the same size and weight, however, the top screen is much larger than that of the DSi, probably for more comfortable viewing, and is wider. Once again, the bottom screen has touch control with an extendable stylus up to 100mm, and there is a camera on the inside of the 3DS just in the center above the top screen, as well as two on the outside, which can all take 3D pictures and enable viewing in 3D as well.

Perhaps the largest new feature of the 3DS is the ability to play games in 3D technology, without the use of special glasses. The system uses technology to merge two pictures together to add depth, called parallax barrier technology, using a process called autostereoscopy. Plus viewers can change the extremity of the 3D on the system by moving the slider up and down to add and decrease depth. More features are that it will have backwards compatibility with the DS, allowing one to play their DS games with increased resolution and circle pad control, as well as a gyroscope and accelerometer for motion control. The Nintendo 3DS has a home button to allow players to access the home menu more quickly, a tag mode will be included, as well as the ability to download 3D movies. The tag mode is currently being known as "StreetPass Mode," as stated by Nintendo. "SpotPass" also allows the 3DS to download information in sleep mode.

Users can also transfer DSiWare titles from their Nintendo DSi to the 3DS. The 3DS also has its own downloadable software, unofficially known as 3DSWare, that can be purchased on the Nintendo eShop, an online shop exclusive to the system.

After the price drop, the Nintendo 3DS gained a sharp boost in both hardware and software. The system sold more in its first nine weeks than the Wii did. [4] Super Mario 3D Land and Mario Kart 7 sold over a million units each in North America, and became the best-selling video game software title in Japan in 2011. [5] 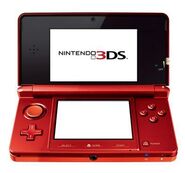 Another Early Prototype From The 3DS