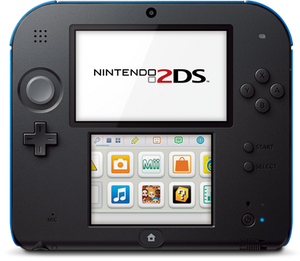 The Nintendo 2DS is a revision of the Nintendo 3DS, the second after the Nintendo 3DS XL. As its name suggests, the system lacks the ability to display 3D visuals, only projecting images in 2D which means it's the 3Ds but without the 3d effects. According to Nintendo of America President Reggie Fils-Aime, it is intended to appeal to younger consumers. [1] It was released in North America and Europe on October 12, 2013, for the price of $129.99 and £109.99, respectively, in black/red, black/blue, and white/red colors. [2] It was discontinued in 2020

The system cannot display Nintendo 3DS games in 3D. [3] However, it does contain dual cameras on its back, so augmented reality games can be played and 3D pictures taken -- however, the photos must be transferred to a 3DS or any other device that supports autostereoscopic 3D to actually be seen in full 3D. It features a "slate" design reminiscent of a tablet, ditching the clamshell design all Nintendo handhelds have yielded since the Gameboy Advance SP. Due to this, the controls have been moved closer to the top screen, and the player must press a button to put the system into sleep mode. [4]

The system comes with a 4GB SD card, a stylus, and a charger. It only includes one speaker, which plays mono sound, but features full stereo via its headphone jack. The microphone has been moved to the lower left. The system features all of the wireless compatibilities of the regular 3DS, though WiFi must be turned off using controls in the software rather than with a physical switch. It also has StreetPass compatibility, but a setting must be toggled to enable it.

Changes From the 3DS

2.Unlike the 3DS's stereo speakers. the 2DS includes a mono speaker.

3. There is a slider that lets you enter sleep mode, due to the absence of the clamshell design.

4. There is one circle pad, instead of the usual two used in the prototype.

5. The 3D Camera is present, and can take 3D photos. However, you can not display them in 3D.

6. The Stylus slot is moved to the right side similar to the Nintendo 3DS XL.

7. The D-Pad is much loose than previous models. 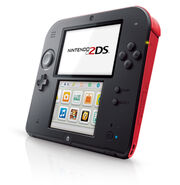 The red version of the 2DS, as seen from the side. 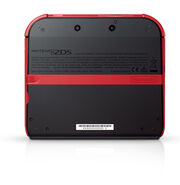 The red version of the 2DS, as seen from the back. 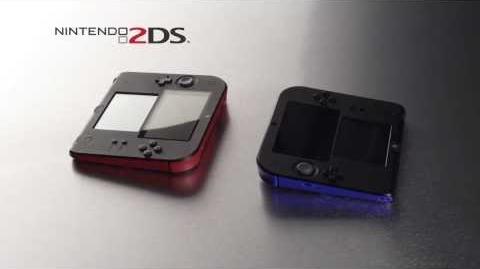