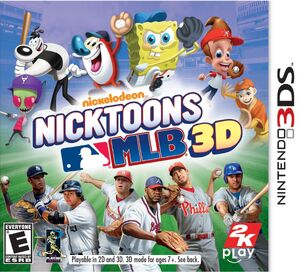 Nicktoons MLB 3D is a baseball game for the Nintendo 3DS. Developed by Black Lantern Studios and published by 2K Play, the game will be released March 6, 2012. [1] It features both Nickelodeon cartoon characters from shows such as SpongeBob SquarePants, Avatar: The Last Airbender, and Jimmy Neutron, as well as Major League Baseball players.

Retrieved from "https://nintendo3ds.fandom.com/wiki/Nicktoons_MLB_3D?oldid=9848"
Community content is available under CC-BY-SA unless otherwise noted.