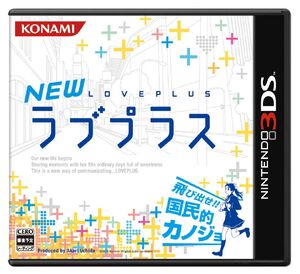 New Love Plus (also known as newloveplus[1]) is a dating sim from Konami, announced at the 2011 Tokyo Game Show, and will most likely be released only in Japan, like the other games in the series, though there have been rumors of a US release since Konami is doing market research for the game. [2]

The game was featured at the Nintendo 3DS Conference 2011 and subsequent Tokyo Game Show, and will be featured at a Love Plus Christmas event titled "Plusmas" during the holiday season. It was released on February 14, 2012 (Valentine's Day).

The girlfriend in the game can identify the player through facial recognition dubbed the "Boyfriend Lock." If someone else tries to play it, the girl might say "Who are you, and what have you done with my boyfriend?" The game contains more voice acting than the other two games, and will make use of StreetPass and SpotPass, one possible use would be so the girls can spread rumors to one another.

The trailer features one of the girls from the other games in the series, Manaka Takane. You could date up to three girls, one being your girlfriend at the end of Friend Mode. There is a "Girlfriend Introduction" mode, where the player may introduce the girl to his or her real-life acquaintances and family. Part 2 of the game is the "meat" of the gameplay.

Retrieved from "https://nintendo3ds.fandom.com/wiki/New_Love_Plus?oldid=10296"
Community content is available under CC-BY-SA unless otherwise noted.