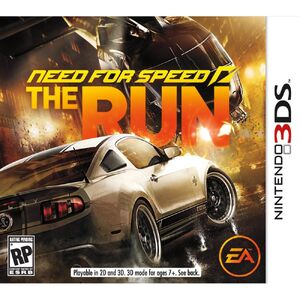 Need for Space: The Run is a racing game for the Nintendo 3DS, and an installment in the Need for Speed series. Being developed by Electronic Arts, the game was released November 15, 2011.

The game is described as "An illicit, high-stakes race across the country. The only way to get your life back is to be the first from San Francisco to New York. No speed limits. No rules. No allies. All you have are your driving skills and sheer determination as you battle hundreds of the world's most notorious drivers on the country's most dangerous roads." [1]

Retrieved from "https://nintendo3ds.fandom.com/wiki/Need_for_Speed:_The_Run?oldid=9103"
Community content is available under CC-BY-SA unless otherwise noted.