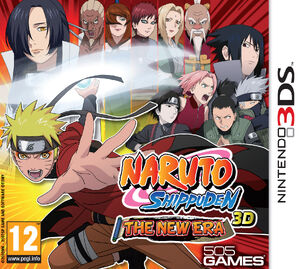 Developed by Tomy and and published by 505 Games, the game was released March 31, 2011 in Japan, June 24 in Europe, and June 30 in Australia, with a yet to be announced release date for North America. [1]

The title starts off with Naruto training on Mount Myōboku, soon after his training he is called back to Konoha by Kakashi Hatake, When he arrives Naruto finds out that Tsunade has cancelled the pact with Sunagakure and the hidden villages all seem to be about to go to war.

Retrieved from "https://nintendo3ds.fandom.com/wiki/Naruto_Shipp%C5%ABden_3D:_The_New_Era?oldid=9016"
Community content is available under CC-BY-SA unless otherwise noted.