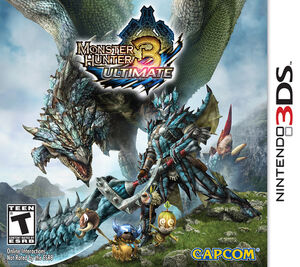 Monster Hunter 3 Ultimate (known as Monster Hunter 3 (Tri-) G in Japan) is a game for the Nintendo 3DS, an installment in the Monster Hunter series, and an expanded remake of Monster Hunter Tri, which was originally released on the Wii console. After much fan speculation and hope that a Monster Hunter game would be coming to the system, the game was eventually confirmed in an issue of Japanese magazine Famitsu. [1]

The game is entirely in 3D and includes a new portside area designed especially with the 3DS’ 3D capabilities in mind. The touch screen features various panels that are useful for hunting and that the player is able to choose which of the panels to display on the screen. One such of these touch screen panels is a target camera panel that automatically turns you in the direction of the monster you’re hunting when it’s pressed.

Ryozo Tsujimoto, the producer of the game mentioned that the Circle Pad Pro, which can be used with the game and is bundled with it, feels really good in one’s hands and is also easy to control. There are 12 weapon types in the games which will all be usable underwater. [7]

The game supports local wireless multi-player, though not online play like its console predecessor and the Wii U version. Online capabilities will be used to download DLC. [8] The localized version of the game will support wireless play with the Wii U version, as well as be able to swap save data with it. These abilities will be patched into the Japanese version. [9]

Logo for the Japanese version.

Logo for the English version. 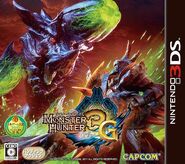 Bundle with a special edition 3DS.

Bundle with the Circle Pad Pro.
Add a photo to this gallery

Retrieved from "https://nintendo3ds.fandom.com/wiki/Monster_Hunter_3_Ultimate?oldid=13545"
Community content is available under CC-BY-SA unless otherwise noted.