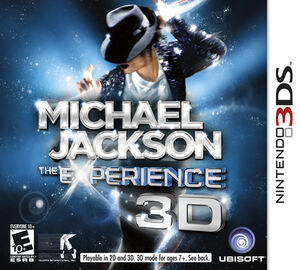 Michael Jackson: The Experience is a dance game for Nintendo 3DS. Developed by Ubisoft, the game features the works of late pop singer Michael Jackson. It was released November 8, 2011. It is also available on Wii, DS, PS3 (requiring PlayStation Move), Xbox 360 (requiring Kinect) and on PlayStation Vita.

With the Nintendo 3DS stylus, draw series of shapes on the touch screen, according to the beat and the choreographies of the Michael Jackson avatar on the screen in environments from 15 of Michael Jackson's classic music videos in stereoscopic 3D. There are 3 difficulty levels, with the hardest difficulty setting being challenging to master. [1]

The following games were released in January 2012 & can be obtained through SpotPass and StreetPass:

(*) mean that this is unlockable by StreetPass

Nintendo Power gave the game a 50, saying "There are problems inherent to bringing console dancing games to handhelds--like, for instance, the fact that they just don't work as originally intended."

Retrieved from "https://nintendo3ds.fandom.com/wiki/Michael_Jackson:_The_Experience?oldid=10218"
Community content is available under CC-BY-SA unless otherwise noted.