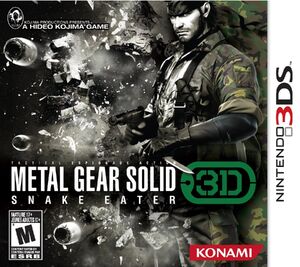 Chronologically in the Metal Gear timeline, Metal Gear Solid: Snake Eater 3D is 1st in the timeline. It is set during the Cold War in 1964, where a CIA agent, codenamed "Naked Snake", later known as Big Boss in the other games following Snake Eater, is sent to the jungles of Tselinoyarsk, in the USSR, or the Soviet Union. Snake is aided over radio by Major Zero, Para-Medic, and his former mentor The Boss during the Snake Eater Virtuous Mission, and after The Boss defected during the Virtuous Mission, began Operation Snake Eater a week later. His mission is to rescue a defecting Soviet scientist named Sokolov who is secretly developing an advanced nuclear-equipped tank called the "Shagohod". The game's focus is on stealth and infiltration, and retains the series' self-referential, fourth wall-breaking sense of humor. The story of Snake Eater 3D is told through numerous cut scenes and radio conversations.

The game has recieved positive reviews. EDGE gaves the game an 8/10, saying "Packed with detail, both in terms of it’s environments and mechanics, this is a game that pays back investment in spades. MGS3 is a moden classic – the tighest, smartest and most emotional journey in the series – and even the HD update doesn’t look as good as this portable treatment." Nintendo Power gave it a 9/10, stating, "A phenomenal game. Almost nothing was sacrificed in bringing the title to the Nintendo 3DS; from the opening scene to the powerful ending, every character model and every bit of excellent voice acting is intact, and the production values are sky-high."

The only negative review was from GameTrailers, which gave the game a 6.8 saying, "Aside from the original PS2 release, this is easily the worst iteration of Snake Eater. The lack of extras, the frustrating controls, and the overall performance issues hold it back from being one of the premier third-party games for the 3DS."[11] 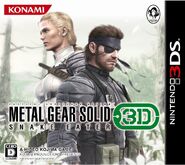 Logo for the game.
Add a photo to this gallery

Retrieved from "https://nintendo3ds.fandom.com/wiki/Metal_Gear_Solid:_Snake_Eater_3D?oldid=19388"
Community content is available under CC-BY-SA unless otherwise noted.