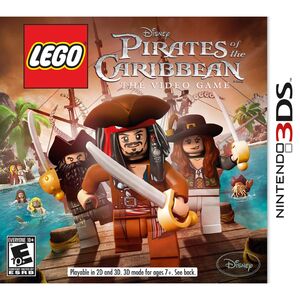 The game has parts of the storyline from the first three movies (The Curse of the Black Pearl, Dead Man's Chest and At World's End) and parts from the latest movie (On Stranger Tides).

Players will explore familiar locations filled with interactive LEGO objects and encounter more than 70 memorable and new characters while making their way through more than 20 levels, and battling in numerous sword fights. Scenes from the film are re-rendered in LEGO style, with the humor the series is known for. Players will need all their pirate cunning to find the hidden LEGO treasures and discover the game’s many secrets. Players can join a friend or family member in the same room for two-player “drop-in/drop-out” cooperative action. Building a collection of characters throughout the game, players can then use their distinctive abilities to gain access to previously unavailable areas.

The StreetPass feature will be used to activate fights between characters.

Retrieved from "https://nintendo3ds.fandom.com/wiki/LEGO_Pirates_of_the_Caribbean:_The_Video_Game?oldid=13711"
Community content is available under CC-BY-SA unless otherwise noted.