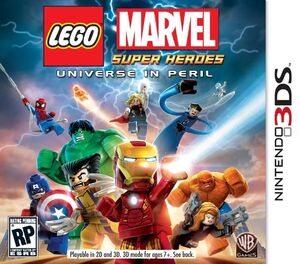 LEGO Marvel Super Heroes: Universe in Peril is an upcoming Lego game for the Nintendo 3DS. Featuring characters from various Marvel properties similarly to how LEGO Batman 2: DC Super Heroes featured characters from various DC Comics properties, is the eighth title in the series on the system. Developed by TT Games and published by Warner Bros. Interactive, it will be released October 22, 2013. [1] [2]

When the Silver Surfer, herald to Galactus, is knocked out of the sky, his surfboard shatters into several 'Cosmic Bricks' that fall onto the Earth. With these blocks containing immense power, Nick Fury calls upon the superheroes of the Marvel universe to retrieve these blocks before they fall into the hands of the Marvel villains. [3]

Players control several Marvel characters, each with their own unique abilities. For example, Spider-Man can swing using his webs, and the Hulk, who is larger than the other figures, can throw large objects, as well as shrink down to Bruce Banner. As in other Lego games, the gameplay is centered around beating up enemies, solving puzzles, and gathering collectibles.

Promotional artwork
Add a photo to this gallery

Retrieved from "https://nintendo3ds.fandom.com/wiki/LEGO_Marvel_Super_Heroes:_Universe_in_Peril?oldid=15889"
Community content is available under CC-BY-SA unless otherwise noted.