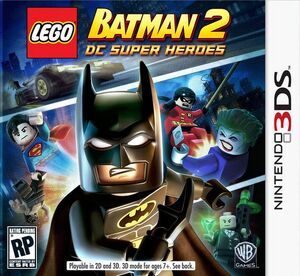 LEGO Batman 2: DC Super Heroes is a LEGO game for the Nintendo 3DS, as well as Wii, Nintendo DS, and PlayStation Vita. The game features iconic characters such as Superman, Wonder Woman, Green Lantern, Batman, The Joker, and Lex Luthor. It was released June 19, 2012 in North America and will be released June 22 in Europe and June 27 in Australia. [1]

A demo of the game was released on the Nintendo eShop on June 7, 2012, following the 3DS E3 software showcase.

In the game, the Dynamic Duo of Batman and Robin join other famous super heroes from the DC Universe including Superman, Wonder Woman and Green Lantern to save Gotham City from destruction at the hands of the notorious villains Lex Luthor and the Joker.

As well, players will be able to explore all new areas of Gotham City utilizing a variety of vehicles including the Batmobile and Batwing. In addition, they’ll be able to fight for justice by mastering new gadgets and suits, such as Batman’s Power Suit and Robin's Hazard Cannon, and using all-new abilities including flight, super-breath and heat vision. 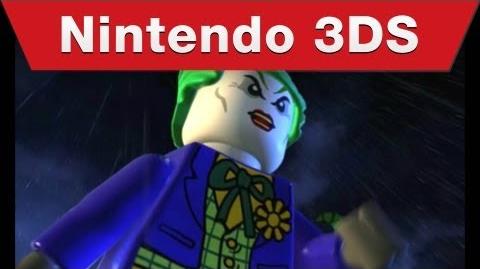 Retrieved from "https://nintendo3ds.fandom.com/wiki/LEGO_Batman_2:_DC_Super_Heroes?oldid=13968"
Community content is available under CC-BY-SA unless otherwise noted.