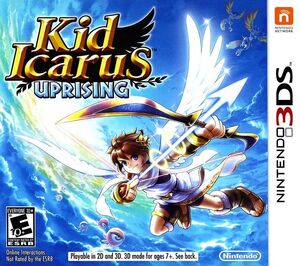 Kid Icarus: Uprising (known as New Light Mythology: Palutena's Mirror in Japan) is an adventure game for the Nintendo 3DS and the third installment in the Kid Icarus series, being the first one to be released in over 20 years. [1] [2] Developed by Project Sora, the game was released March 22, 2012 in Japan, March 23 in North America and Europe. [3] [4] [5] [6] [7]

The 3D Classic "Kid Icarus" was offered as a preorder bonus for those who paid for the game prior to release at GameStop, Best Buy, or Amazon. [8] The game comes in a box containing the game, 6 random AR "Idol" cards that are used in an AR Mode in the game, and the Nintendo 3DS Stand.

Masahiro Sakurai, the designer of the game, has stated that he currently has no plans for a sequel. [9] [10]

Kid Icarus: Uprising was the first game announced for the Nintendo 3DS and was announced alongside the system at the E3 2010 expo on June 15, 2010. In an interview in the September 2010 issue of Nintendo Power, Masahiro Sakurai stated that "The game has a relatively simple design for a reason: we wanted it to be ready close to launch." In October 2010 concerns began to spread regarding the game's control scheme particularly concerning the 3rd person shooter segments.

On January 25, 2011, the 3DS launch titles were formally announced, of which Kid Icarus Uprising was not one of. On June 7th, at the E3 2011 convention, Nintendo announced further details regarding the game. On September 12, 2011 Nintendo broke their silence and confirmed that the game would launch in Japan in January 2012 and subsequently, the announcement of a series of Kid Icarus shorts. The game was pushed back once again and on December 13th 2011, Nintendo finally confirmed the release date for the title. [11] On January 21, the game went gold, production finished. [12]

The game's story begins with the return of the dark goddess Medusa and her Underworld Army. With the help of Palutena, goddess of light and guardian of the human race, the heroic angel Pit must combat the forces of darkness as he battles Medusa and her minions, such as Twinbellows, Dark Lord Gaol, Thanatos, and Pandora as well as his evil counterpart, Dark Pit, by air and by land.

The game is a fast-paced and action-packed blend of aerial and ground-based shooting built on elegantly intuitive and streamlined play control. Aerial gameplay involves shooting enemies while being propelled at high speeds on a set path while the ground sections allow you to move at your own pace and defeat enemies in third-person shooter fashion. The ground battles will be longer than the air battles. [13]

Each chapter of the game is divided into three parts. The first is a flying section that requires Pit to fire at oncoming enemies while reaching his destination. The second is a ground part where Pit fights groups of ground enemies and advances to the area where the boss lies, and the third area is the boss battle that wraps up the level.

A new system called the "Fiend's Cauldron" allows players to customize their play experience by adjusting the intensity level, which range from 0.0 – 9.0 for each individual Chapter. As the intensity increases, more powerful weapons drop from defeated enemies and players will be able to earn Hearts, which can also be used to purchase new weapons. In order to increase the intensity, players must bet by placing an increasing number of Hearts into the Fiend's Cauldron, and if the player loses, some Hearts will be lost and the intensity will be lowered. [14]

The game has Nintendo Network support and features both local and online multiplayer with 6 players, who can compete in two styles, one in which they are split into two groups and fight the other, and the other a "Free For All" style of gameplay. Uprising also has voice acting, with Pit, Palutena, Medusa, and other characters speaking to each other during gameplay and cutscenes. Pit and Palutena's redesigns from Super Smash Bros. Brawl are retained in this game.

The game also supports the Circle Pad Pro. In the game, the reticle and camera are controlled per use of the touch screen. The peripheral will allow left-handed players to control the reticle and camera with their dominant hand and play as Pit using their right hand on the Circle Pad Pro, as opposed to the traditional set up, which is more suitable for those right-handed. [15] The game is also bundled with a free stand that will allow players to rest the system on it while playing the game, as well as six augmented reality cards. [16] [17] Bonus AR cards have been distributed through special events. [18]

Three series of animated shorts featuring the characters from Kid Icarus: Uprising will be coming to the Nintendo 3DS. All episodes are in full 3D. The first series, "Thanatos Rising", animated by Production I.G., features Pit as the main character in an action-oriented setting with Medusa’s minions and Thanatos, the god of death. This series ran for three episodes, with the first episode released on March 9, 2012, the second on March 10, and the third on March 13 in North America and Japan. [19]

The second short, animated by Studio 4C, "Medusa's Revenge" is a one-episode look at Medusa’s actions up to her return in the game, released March 16. [20] The final series, "Palutena's Revolting Dinner", animated by Shaft, ran for two episodes, and focused on the comical adventures of Palutena, with the first episode released on March 19 and the second on March 24. [21]

Promotional image for the Pit-centered shorts.

Promotional image for the Palutena-centered shorts.

Promotional image for the Medusa-centered shorts.
Add a photo to this gallery

The game has received positive reviews. Japanese magazine Famitsu gave it the perfect score of 40 out of 40, making Uprising the first Nintendo 3DS title to ever receive that score. [22] Nintendo Power gave it a 95, reason being "This game has everything but the kitchen sink, and in that respect it's a lot like Super Smash Bros. Melee and Brawl. And like those titles, Kid Icarus: Uprising is a masterpiece."

Nintendo World Report gave it the same, and said "Kid Icarus: Uprising is jam packed with content, and outside of the control issues, is an amazing game. The 21-year wait for a new Kid Icarus game was completely worth it, because this is one of the craziest and most original games released by Nintendo in a while. If you have a 3DS and are even remotely interested in this game, I highly recommend that you seek this out." [23] Official Nintendo Magazine gave it a 91, reason being "It feels far bigger than the console upon which it appears, it's deeper than most home console titles and more content-packed than any other 3DS game yet released." [24]

Joystiq gave it a 90, stating "I already know reactions to this game will be polarized, and it basically comes down to whether people can get used to those (again, admittedly) uncomfortable controls... But I can't help but be glad I stuck it out through the overlong adjustment period. The upbeat, funny, deep action game that comes after is totally worth the investment." [25] GamesRadar gave it the same score, calling it "A very impressive game. Although there's an initial adjustment period for its controls, each stage is masterfully designed, rewarding exploration and experimentation, plus it's surprisingly deep." [26]

Nintendo Life gave it a 90 as well, and too called it "One of the most attractive, exhilarating, entertaining and outrageously fun titles so far on 3DS. While Mario has recently brought his style of gaming bliss to the handheld, Uprising provides a substantial amount of content, its own brand of adrenaline pumping set pieces and wonderful humour. It sweeps you along at breakneck speed, and is a must-have title for that very reason." [27]

IGN gave the game an 85, saying "The game is simply addicting, both in its arresting, fast-paced action and its ability to inspire repeat visits with its scalable difficulty, bite-sized mentality and seemingly endless amount of unlockable content." [28] GameTrailers gave it an 83, and said "[It] stumbles a bit due to its uncompromising control scheme that puts just a few too many hurdles in the way of your enjoyment. Largely, though, Pit's comeback is a successful one." [29]

GameSpot gave the game an 80, stating "When it hits its stride, Uprising is a huge amount of fun. Once you get over the initial control discomfort, there's a deep and satisfying shooter to be found here." [30] Edge Magazine, which also rated it this, said "[Masahiro] Sakurai's prints are all over Uprising, providing a comeback that balances depth and accessibility with little compromise." [31]

Two more negative reviews came from Game Informer and Destructoid. The former gave it a 70, and said "Kid Icarus: Uprising is a series of good ideas that ultimately suffer from its poor controls. There's a lot to do in the game, and more importantly, I felt compelled to do all of it. As the credits rolled I looked back fondly at the experience, as my hand throbbed along with the music. I'm looking forward to doing more with Pit in the future, just not like this." [32]

The latter gave it an even lower score, of 50, stating "Equal parts tremendous and terrible, with a fine line clearly separating the two distinct territories. Unfortunately, since each stage ends on a sour note, the overall emotion one gains is that of bitter disappointment. It's a game that repeatedly starts strong and ends despicably, and as much as I want to adore it, I ended every session cursing its name." [33]

Retrieved from "https://nintendo3ds.fandom.com/wiki/Kid_Icarus:_Uprising?oldid=15882"
Community content is available under CC-BY-SA unless otherwise noted.