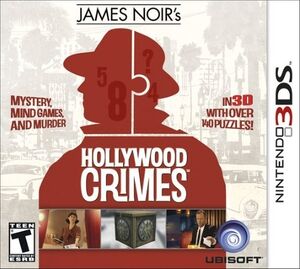 James Noir's Hollywood Crimes is a puzzle game for the Nintendo 3DS. Published by Ubisoft, it was released on November 1, 2011 in North America and November 25 in Europe.

The player controls a contestant in a TV murder-based game show. Your goal in the game is to solve puzzles in order to catch the murderer. The game takes place in the 1960's and utilizes appropriate visuals for that time period. There are a total of over 150 different puzzles for players to complete. [1]

James Noir's Hollywood Crimes has relatively average review scores. Official Nintendo Magazine of the UK awarded the game one of its highest scores: a 7.6, they noted that while the game does have some complex and thought-provoking puzzles, that it doesn't have much replay value.

Nintendo World Report gave the game a 7.5 and stated that "Overall, the game is good, though not great. The puzzles are interesting and the story is intriguing. The visuals are solid and the audio's OK. If you're into fun puzzle games with gripping mysteries, James Noir might be one to look into getting." [2]

Other reviews include a 7.0 from GameSpot.com, and a 5.0 from Nintendo Power Magazine. Gaming Age gave the game its most negative review and gave the game a 2.5 overall. [3]

Retrieved from "https://nintendo3ds.fandom.com/wiki/James_Noir%27s_Hollywood_Crimes?oldid=19253"
Community content is available under CC-BY-SA unless otherwise noted.