The game features two different rhythm game modes (button and touch) and three difficulties per song. Players can enjoy a highly customizable experience with user customization options for button icons and sounds, character costumes and gear for the character rooms. Players can also create and share personalized player cards that show off who they are as well as create customized dance routines to the songs, their own musical phrase and personalized comments about their favorite in-game videos, all via StreetPass. The game also utilizes the system's AR card and photo capabilities to bring characters to life in 3D. [3] 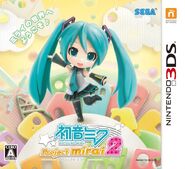 Japanese box artwork
Add a photo to this gallery

Retrieved from "https://nintendo3ds.fandom.com/wiki/Hatsune_Miku:_Project_Mirai_Remix?oldid=18891"
Community content is available under CC-BY-SA unless otherwise noted.