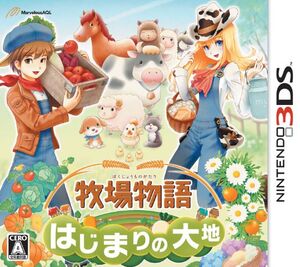 Harvest Moon: A New Beginning (known in Japan as Harvest Moon: The Land's Origins[1]) is a farming simulation game for the Nintendo 3DS.

An installment in the Harvest Moon series, it is the second to be released on the system after Harvest Moon: The Tale of Two Towns. Published by Marvelous AQL in Japan and Natsume in North America, the game was released February 23, 2012 in Japan and November 6 in America, though copies began selling a few weeks prior to its official release in the latter. [2] [3] [4]

Retrieved from "https://nintendo3ds.fandom.com/wiki/Harvest_Moon:_A_New_Beginning?oldid=12854"
Community content is available under CC-BY-SA unless otherwise noted.