HarmoKnight (known as Rhythm Hunter: HarmoKnight in Japan) is a rhythm platforming game for the Nintendo 3DS, released through the Nintendo eShop. It was announced at the August 2012 Nintendo Direct. [1] Developed by Game Freak, it was released September 5, 2012 in Japan and will be released March 28, 2013 in North America and Europe. [2] [3] [4] [5]

Players control a young boy (sometimes confused as a girl by fandom) named Tempo as he travels through automatically scrolling levels. The aim of each level is to gather as many notes as possible, either found throughout the level or earned by hitting enemies and objects corresponding with the rhythm of the music. Getting hit by an enemy or an obstacle will cause him to lose a heart, failing the level if he loses all his hearts. There are also bonus stages that feature music from Game Freak's other series, Pokémon. 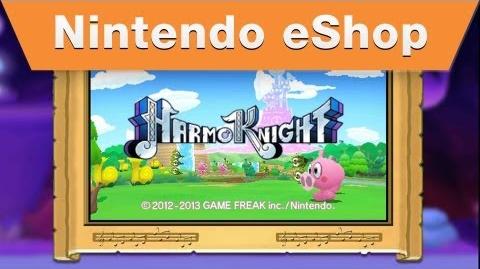