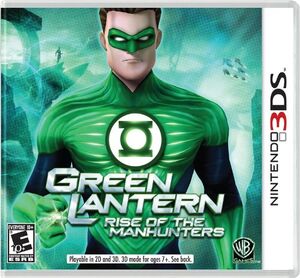 Green Lantern: Rise of the Manhunters is a game for the Nintendo 3DS that was released to tie-in with the release of the live-action Green Lantern film in theaters, and came out the same day as the movie.

While the PlayStation 3 and Xbox 360 covers of the game have the live-action Green Lantern as depicted in movie screenshots, the Wii, DS, and 3DS covers sport a somewhat cartoonier and computer-generated figure. [1]

Retrieved from "https://nintendo3ds.fandom.com/wiki/Green_Lantern:_Rise_of_the_Manhunters?oldid=9916"
Community content is available under CC-BY-SA unless otherwise noted.