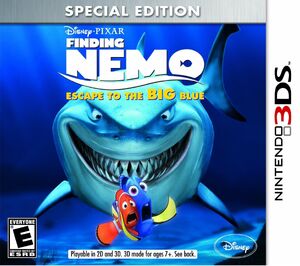 Finding Nemo: Escape to the Big Blue is a game for the Nintendo 3DS and a port of the title originally released for Nintendo DS. [1] Published by Disney Interactive Studios, it was released September 11, 2012 to coincide with the 3D theatrical re-release of the film.

Retrieved from "https://nintendo3ds.fandom.com/wiki/Finding_Nemo:_Escape_to_the_Big_Blue?oldid=12761"
Community content is available under CC-BY-SA unless otherwise noted.